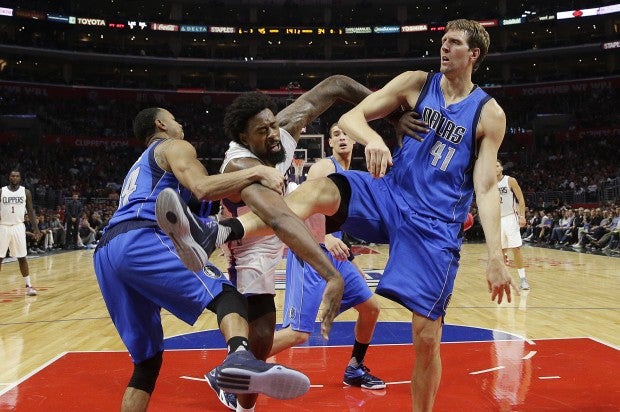 LOS ANGELES — The Los Angeles Clippers won their opening home game of the new NBA season on Thursday, beating Dallas 104-88 in something of a grudge match between two franchises that had an offseason dispute.

The two teams wrangled in the offseason over DeAndre Jordan, who agreed to join the Mavericks before the Clippers swooped and persuaded him to renege on that deal and move to Los Angeles. Jordan had 15 points.

In the day’s other games, Memphis won at Indiana, and Atlanta also took a road victory, beating New York.

Los Angeles’ Blake Griffin had 26 points and 10 rebounds while Jamal Crawford added 15 points for the Clippers, who pulled away in the second half with a strong performance from the bench players.

Memphis’ Marc Gasol scored 20 points to lead the Grizzlies to a 112-103 win at Indiana.

Mike Conley added 13 points and 10 for the Grizzlies, who had seven players score in double figures and closed it out by outscoring Indiana 18-7 over the final 3:49.

George Hill scored 20 points for the Pacers, who have dropped their two opening games of a season for the first time since 2009.

Memphis, which has won four straight over the Pacers, shot 50 percent from the field, were a solid 7 of 16 on 3-pointers and scored 39 points in the final 12 minutes.

Al Horford added 21 for the Hawks, who lost heavily in their home opener but returned swiftly to the form that saw it win 60 games last season and have the best record in the Eastern Conference.

Carmelo Anthony scored 25 points and was 10 for 27 from the field for New York.