Kobe says another Olympics ‘would mean the world’ to him 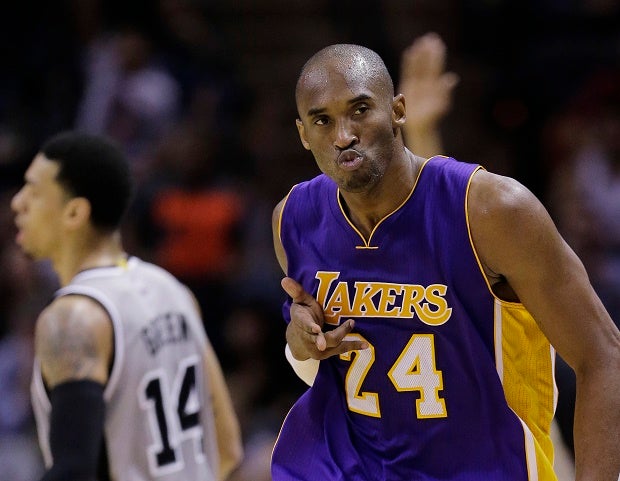 This Dec. 12, 2014, file photo shows Los Angeles Lakers’ Kobe Bryant (24) celebrating after he scored against the San Antonio Spurs during the second half of an NBA basketball game in San Antonio. This could be Bryant’s final season depending on how it unfolds. Part of his role will be to mentor D’Angelo Russell, Julius Randle and Jordan Clarkson. Passing the torch and passing up shots are two different things, though. AP FILE PHOTO

MIAMI — Kobe Bryant sounds like someone who wants to play beyond this season — if only for a few months.

Bryant said Monday that he still wants to be part of the team that USA Basketball will send to the 2016 Rio de Janeiro Olympics, a tournament that theoretically could mark the end of his competitive basketball career if he retires at the conclusion of this NBA season. Bryant helped the US win gold at the 2008 Beijing Games and 2012 London Games.

“It would mean the world to me to be around those guys,” Bryant said in an interview with The Associated Press. “I think to be able to have a chance to continue the relationship that I already have with most of those guys, talking and just kind of being around each other and understanding that this is it, it’s just us being together, that would be fun.”

Bryant is in his 20th season with the Lakers, and questions have been rampant for some time whether this NBA year will be his last. Bryant has suggested that he’s leaning in that direction, though has stopped short of making a true retirement announcement.

READ: Byron Scott: Kobe told me this could be his last year | NBA: No Hollywood ending as Kobe Bryant embarks on 20th season

The notion of Bryant being on the Olympic team started being bandied about in earnest in August, when USA Basketball chairman Jerry Colangelo revealed that he had spoken with the five-time NBA champion — who previously said he wouldn’t play in Rio — about the potential of being on the team. The 12 players on the list for Rio is expected to be revealed in June.

“How I feel now is that I feel like I can add value from a leadership perspective and a defensive perspective,” Bryant said. “I can still move extremely well defensively.”

Bryant will turn 38 two days after the gold-medal game in Rio. He has been on five different USA Basketball national teams, with those teams combining to go 36-0 in international competition. If he is picked for Rio, he and other veterans like LeBron James, Chris Paul and Carmelo Anthony would have a chance at becoming the first U.S. men to win Olympic basketball gold three times.

“I would like to play,” Bryant said. “I think it’d be awesome. A beautiful experience. I’m a global kid. I grew up in Italy, I know a lot of athletes from different parts of the world, from different sports. It’d be great to play in that environment.”

Bryant is the third-leading scorer in NBA history. He’s averaging 16.5 points per game so far this season, and he and the Lakers visit the Miami Heat on Tuesday night.