American imports Victoria Hurtt and Sareea Freeman sat it out but PLDT Home Ultera still got the job done.

That’s how deep and imposing the Ultra Fast Hitters proved in whipping the University of the Philippines Lady Maroons, 25-11, 25-17, 25-17, Sunday to seal a championship showdown with Philippine Army in the Shakey’s V-League Season 12 Reinforced Conference.

Starring Aiza Pontillas and Sue Roces, the Ultra Fast Hitters simply taught the Lady Maroons a neat lesson in volleyball, firing crisp smashes and forcing their rivals to commit a series of errors.

No doubt PLDT will be needing that kind of firepower and a sprinkling of luck when they face the Lady Troopers, who had a leisurely victory cruise as well, 25-16, 25-10, 25-22, over Philippine Navy in the other semifinal match.

“We defended well and had several open looks,” said Pontillas, who led PLDT with 12 attacks and one service ace. “In the finals, we can’t afford to commit lapses. We should improve our communication on the floor.” 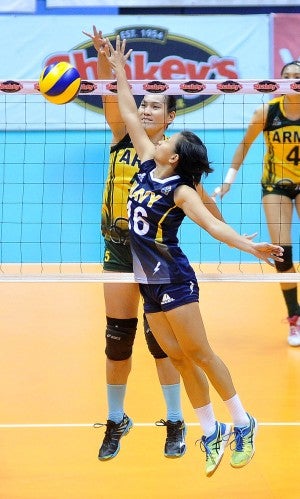 Hurtt and Freeman, signed up by the Fast Hitters prior to the playoffs to match Army’s prowess, stayed on the bench throughout.

Picking up the cudgels for PLDT were Roces, Janine Marciano, Ann Latigay and Rosario Soriano, who scored three of the team’s last six points.

“Our two foreign players will give us more options. We’ll be ready in the finals,” said PLDT coach Roger Gorayeb, bidding for a rare coaching grand slam after winning the Open Conference title for PLDT and the collegiate crown with National U.

“I sat them (Hurtt and Freeman) out because I want them to see how the locals play,” he added.

They’ll meet Navy in a best-of-three series for third place next week. On a roll with their sixth straight win, the unbeaten Lady Troopers leaned again on Jovelyn Gonzaga, Joanne Bunag, Aby Maraño and Mary Joy Palma when the Lady Sailors threatened to stretch the match to a fourth set.

Florence Madulid conspired with Lilet Mabbayad and Pau Soriano as the Lady Sailors nearly upstaged Army near the end.

Consecutive spikes by Madulid and Mabbayad put Navy ahead, 18-17, but Army weathered the storm with Bunag, Maraño and Michelle Carolino turning their misfortunes around.