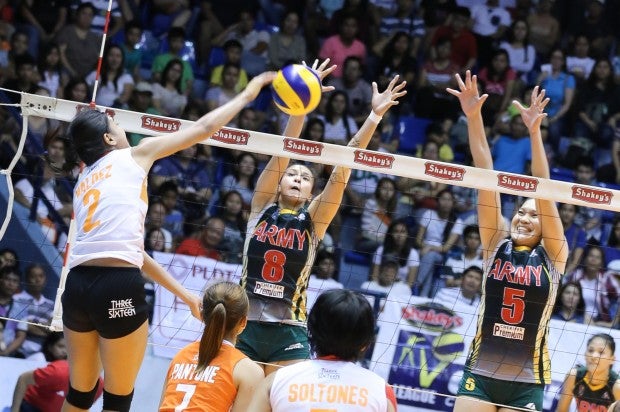 Alyssa Valdez made only her second appearance for PLDT Home Ultera this season and it turned out to be her last.

Back-to-back errors ultimately ended the season for the Lady Troopers when Jovelyn Gonzaga’s attack went straight to the net for the 24-21 PLDT match point and Aby Maraño had a net violation  to award the Ultra Fast Hitters the championship.

Valdez was in the lineup for PLDT during the eliminations but did not play until the Game 1 of the finals last Saturday with Ateneo advising her to take a rest after she competed in the UAAP beach volleyball tournament.

The Ateneo star fired 25 points in a grueling win in the championship opener.

PLDT’s title in the Reinforced Conference is head coach Roger Gorayeb’s third straight V-League crown after also steering the Ultra Fast Hitters in the Open Conference and National University in the Collegiate Conference.

“As long as we become the champion [the Grand Slam] is just a bonus,” Gorayeb said. “I didn’t even know that was a Grand Slam. I’m just thankful that I won three this year.”

Valdez had a scary incident in the fourth set when her left knee collided with the head of teammate Sue Roces in a dig attempt when the set was tied at 13-13 leaving the two-time V-League MVP hobbling for the remainder of the match.

But even with one good leg, Valdez still came away with 22 points to lead PLDT while import Sareea Freeman added 17 and outside hitter Gretchel Soltones had 10.

Aby Maraño led Philippine Army with 14 points and Gonzaga had 13. Maraño played in her