Nadal stunned by Verdasco in Open first round | Inquirer Sports

Nadal stunned by Verdasco in Open first round 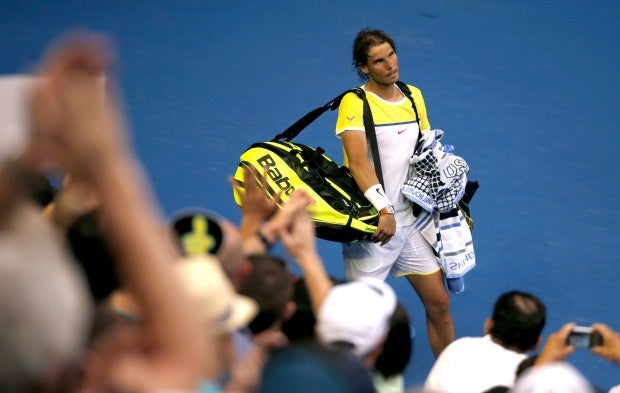 World number five Rafael Nadal was sent crashing out of the Australian Open first round by fellow Spanish left-hander Fernando Verdasco in an epic five-set match on Tuesday.

The latest chastening loss for Nadal, 29, extends a Grand Slam dry spell which goes back to the 2014 French Open, and will increase fears over his long-term ability to compete at the elite level.

The rollercoaster encounter also recalls the 2009 semi-final between the two Spanish left-handers which Nadal won in five hours and 14 minutes, the second longest match in tournament history, en route to his only Australian Open title.

Verdasco looked headed for the exit when he trailed 0-2 early in the fifth set, only to reel off six straight games to snatch only his third victory in 17 encounters with Nadal.

Verdasco was on fire with his thumping forehand, hitting 41 forehand winners in a total of 90 outright winners.

His all-or-nothing approach was shown by his 91 unforced errors as he trailed Nadal by two sets to one in an awesome hitting display on Rod Laver Arena.

He broke Nadal’s serve five times, while losing his service on six occasions in the battle of the left-handers.

“I think I played unbelievable in the final set from that early break and I started hitting winners,” said the 45th-ranked Verdasco.

“I started serving better in the fourth set and he started to hit a little less deep so I started to come in more and tried to be aggressive and went well.”

It was the first time Nadal had lost in the opening round of a major tournament since his shock loss to Steve Darcis at Wimbledon in 2013.