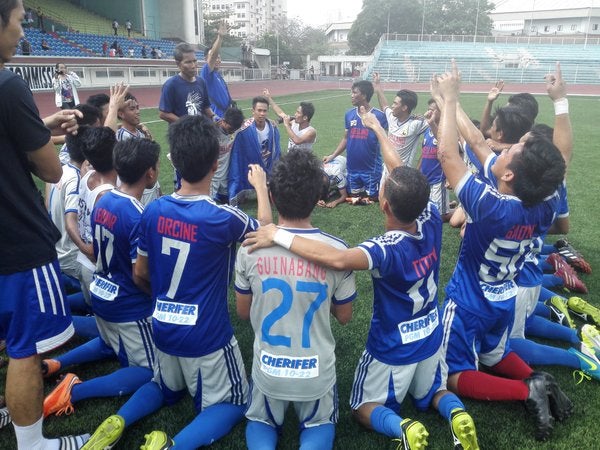 Arellano U played inspired ball and pulled off a stunning 2-0 victory over league powerhouse San Beda Tuesday to snare its first ever title in the 91st NCAA football tournament at the Rizal Football Field.

Charles Vincent Gamutan and Jumbeng Guinabang delivered the decisive goals as the Chiefs completed their fairy tale run and snared their first football championship since they joined the league six years ago.

The win also ended San Beda’s five-year domination of the sport while finally giving Arellano its first title after two failed attempts in 2012 and 2013 when the latter was denied twice by the former.

Saluria also thanked the school for constructing its own football field complete with athletes’ dormitory in Lagro, Quezon City.

“That was big factor, that football field. It gave us a venue to really train,” said Saluria.

Arellano U thus sealed its second title of the year after also topping men’s chess in the first semester last year.

San Beda, which owns a league-best 22 crowns including the last five, missed the services of striker Connor Tacagni, who was assessed a second yellow card in their 2-1 win over Arellano U last Saturday that forged a one-game title clash, and skipper Matt Asong, who sat out due to injury.

In juniors’ play, St. Benilde-La Salle Greenhills came back from 1-3 down in the first half with a strong second half effort to eke out a 5-3 victory and seal the high school championship.

Read Next
Resurgent Venus stopped in 1st round at Australian Open
EDITORS' PICK
Get 80% OFF Ignite 2020 Cyber Tickets starting 28 September
Lakers, Heat start their preparations for NBA Finals
‘Psychic numbing:’ When people stop giving a damn about the pandemic
Water remains our saving grace right now
Palace blasts Facebook ‘censorship:’ Why only take down pro-gov’t pages?
Smart poised to turn PH into ‘Smart 5G country’ with nationwide rollout
MOST READ
‘I offered to resign’ because of endless corruption, says Duterte
Duterte will ask Congress to abolish PhilHealth
Duterte keeps Metro Manila under GCQ for entire October
Duterte tells Facebook: Why keep operating in PH if you can’t help us?
Don't miss out on the latest news and information.