Kobe Bryant looks back 10 years after his 81-point game 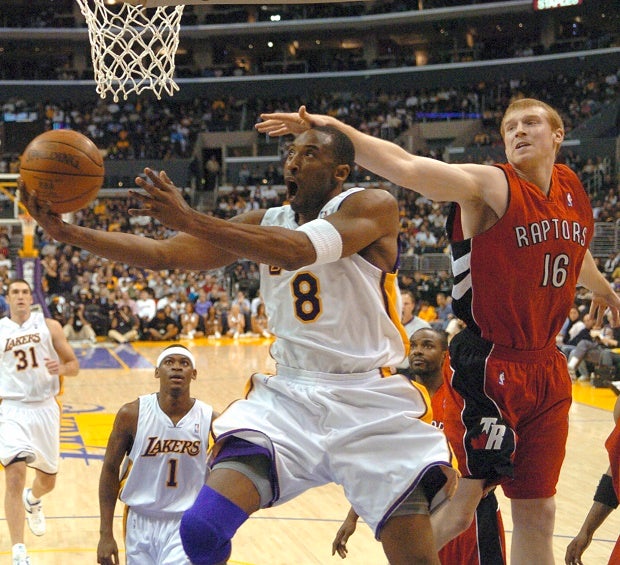 In this Jan. 22, 2006, file photo, Toronto Raptors’ Matt Bonner can’t stop Los Angeles Lakers’ Kobe Bryant from getting to the basket in the first half of NBA basketball game in Los Angeles. Bryant still looks back with surprise on the night 10 years ago when he scored 81 points against the Raptors. The Lakers’ star guard celebrates the 10th anniversary of the second highest-scoring performance in NBA history on Friday, Jan. 22, 2016. AP FILE PHOTO

LOS ANGELES — Kobe Bryant remembers exactly what he had to eat in the 24 hours before he scored 81 points against the Toronto Raptors 10 years ago Friday.

The rest is a beautiful blur in the mind of a 20-year NBA veteran as he looks back on the most prolific, ridiculous individual night of his career.

“I’ve had to play it over in my mind several times,” Bryant said. “There is really no explanation for it. I can always explain it from an X’s and O’s standpoint, from a training standpoint, but when nights like that happen, there is always something mystical about it. Scoring that many points, that really carries no explanation.”

Bryant turned an ordinary Sunday game for a couple of mediocre teams into the second highest-scoring performance in NBA history. He made 28 of his 46 shots, hit seven 3-pointers, went 18 for 20 on free throws, scored 55 points in the second half — and the Lakers won, 122-104.

Kobe still can’t explain what got into him, but it wasn’t health food: He had spent the previous hours celebrating the third birthday of his daughter, Natalia.

“I had pepperoni pizza and grape soda the night before,” he said with a laugh. “Think I had a burger before the game, burger and fries. No joke. Went out there and played. My knee was very sore, so I was kind of trying to work through that a little bit.”

Only Wilt Chamberlain’s 100-point game in 1962 stands above Bryant’s one-game effort — but for pure virtuosity, Bryant’s 81-point game stands out.

Chamberlain’s performance for the Philadelphia Warriors included 63 shot attempts and 28 free throws made while the Knicks intentionally fouled him. Bryant largely created his own shots from the perimeter, showing off his explosive movement and that peerless ability to create a jump shot amid suffocating defense.

The Lakers weren’t a good team that season, although they weren’t nearly as bad as their current 9-35 squad with which Bryant must finish his career.

His fellow starters against Toronto were Kwame Brown, Lamar Odom, Chris Mihm and Smush Parker, the Lakers’ second-leading scorer with 13 points. Bryant was the focal point of every defense faced by the Lakers that season, although he still was averaging 34.8 points per game heading in.

“When nights like that happen, there is always something mystical about it. Scoring that many points, that really carries no explanation.”

Bryant didn’t face many double-teams from the Raptors, although he scoffs at the notion that it would have mattered. Veteran coach George Karl remembers watching the game on television and wondering why Toronto didn’t try double-teams, triple-teams — anything to take Bryant out of the Lakers’ offense.

“There is that strategy, and I have used it on Kobe, that you want him to take all the shots,” Karl said. “It’s easier to try and control everybody else than it is to stop Kobe. Try to make him a less efficient player. But there’s got to be a number – 40, 45, 50 – where you have got to change your strategy.”

With Odom constantly in his ear reminding him to keep pushing, Bryant surpassed Elgin Baylor’s 71-point performance for the best in Lakers history. The Staples Center crowd stood for much of the final minutes as Bryant continued to fill it up in a fairly close game, only leaving with a few seconds left. He hugged coach Phil Jackson on the way off the court.

Bryant has thought about his 81-point game extensively this month, part of the parade of nostalgia surrounding him weekly as fans and opponents celebrate him one last time before retirement in April.

The best individual night of his career doesn’t compare to his five NBA championships, yet it still looms large in the memory matrix of his life and career.

“It’s amazing how time flies,” Bryant said. “It’s absolutely crazy it was 10 years. My little baby girl is turning 13. Whoa. She was a little baby in my arms, and now she is a teenager.”