Valdez, Maraño, Ho credit rise of PH volleyball to players before them 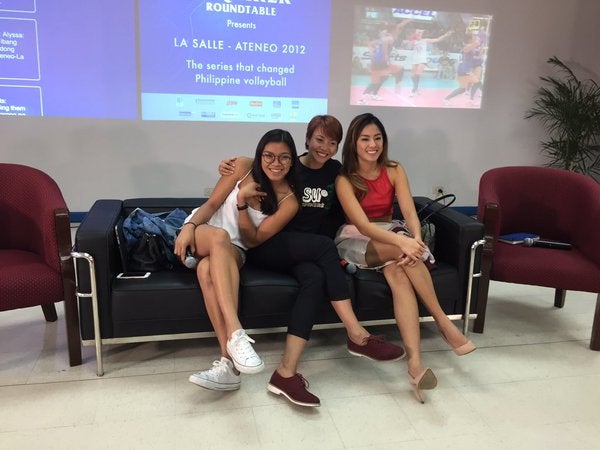 Former rivals Alyssa Valdez and Gretchen Ho from Ateneo and Aby Maraño from La Salle (middle) share their stories about the 2012 UAAP finals, the series that changed PH Volleyball.

Alyssa Valdez, Aby Maraño and Gretchen Ho will forever be remembered as part of the batch that brought Philippine volleyball to unprecedented heights.

But instead of taking credit, the three volleyball stars paid tribute to the legends that paved the way for the sport.

“I honestly think that we’re just the pinnacle of the popularity of volleyball, it started way way back,” said Ho, the former Ateneo Lady Eagle.

The three volleybelles were present during a roundtable discussion at Philippine Daily Inquirer office in Makati reliving the very first Ateneo-La Salle meeting in the UAAP finals in 2012, a series that sparked the emergence of volleyball as one of the most popular sports in the country today.

“We credit our success to the ones who came before us, who inspired us because they drew us into the sport,” Ho said. “For us it was ‘ate’ Cha soriano, Carla Vega, Steph Gabriel. They were our idols.”

It was only four years ago when an inexperienced Ateneo side and a powerhoouse La Salle faced off in the UAAP volleyball Finals at San Juan Arena, perhaps the last time a women’s volleyball championship game will be held at the venue.

It was never the same after that.

And for Maraño, there’s a reason why one of the fiercest rivalries in Philippine sports also spilled over to volleyball.

“Because of that particular participation, La Salle and Ateneo fought in a UAAP championship game and after that volleyball arrived in the Philippines,” Maraño said in Filipino. “Back then people only knew about Ateneo-La Salle in basketball.”

“As Gretch (Ho) said, we’re paying tribute to our seniors and that’s really true. They were the ones who inspired us and to be like them,” added the former De La Salle Lady Spiker, who also recalled the story she was told by her ex-college coach that back then that tickets were being given away just to draw an audience.

Now, you’d be lucky not to get your hands on those coveted tickets during the UAAP women’s volleyball finals.

It was also during the volleyball’s rise that social media became a powerful tool, and it played a vital part in popularizing the sport and the players.

“It just so happened that we were there at that time where volleyball boomed. We were so lucky that we were able to maintain and continue what they started,” said Valdez, who is now in her final playing year with Ateneo. “It’s also timing that at this day and age, we now live in a world where it would be hard for us to survive without the internet.”

The full video of the Inquirer Sports roundtable with Alyssa Valdez, Aby Maraño and Gretchen up soon on INQUIRER.net.