Peyton Manning to Belichick: 'This might be my last rodeo' | Inquirer Sports
Close
menu
search

Peyton Manning to Belichick: ‘This might be my last rodeo’ 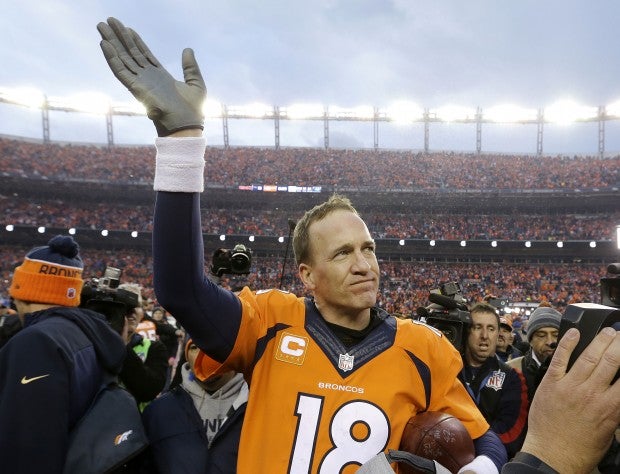 Denver Broncos quarterback Peyton Manning waves to spectators following the AFC Championship game between the Denver Broncos and the New England Patriots, Sunday, Jan. 24, 2016, in Denver. The Broncos defeated the Patriots 20-18 to advance to the Super Bowl. (AP Photo/Chris Carlson)

DENVER — Peyton Manning isn’t saying that Super Bowl 50 is his grand finale, he’s just saying it could be.

NFL Network cameras caught an intriguing exchange between Manning and New England coach Bill Belichick after Denver’s 20-18 win over the Patriots in the AFC championship game on Sunday.

When they embraced, Manning leaned in and told Belichick, “Hey listen, this might be my last rodeo. So, it sure has been a pleasure.”

Neither spoke of their exchange afterward.

Earlier this month, Manning said, “I’d be lying if I said I’m not thinking about that,” when asked if this could be it for him.

The five-time MVP’s season ends Feb. 7 in the Super Bowl against Carolina.

There are other signs that Manning is preparing as if he could ride into retirement next month.

He let his little boy stand beside him during his news conference after the AFC championship, just as he had taken him to the sideline before one of the games he missed in December.

These are things the manically focused Manning never had done before.

Long after the delirious crowd disappeared Sunday night, Manning walked through the north end zone at Sports Authority Field with his family, picked up pieces of thin blue and orange confetti and took in the scene, including the giant scoreboard in the south end zone that read, “Next Game: Super Bowl 50.”

Pushing 40, Manning will be the oldest quarterback to start a Super Bowl when he takes the field for his 293rd career game, including 27 postseason appearances.

It’s a chance for Manning to cap his most maddening season by becoming the first starting QB to win Lombardi Trophies for two different teams.

No. 18’s 18th NFL season was his most trying. It included a rash of injuries and insults and saw him serve as a scout team quarterback for the first time ever and a backup QB for the first time since his freshman college year at Tennessee.

Bothered by a left foot injury, Manning threw just nine TD passes and 17 interceptions in nine starts, but he was 7-2 in those games, one of the losses coming against Kansas City on Nov. 15 when he left the game injured.

He missed the next seven starts but won his starting job back from Brock Osweiler on Jan. 3 when he entered in the third quarter against San Diego and ignited a stagnant, mistake-prone offense.

Manning led four scoring drives and the Broncos’ 27-20 win earned them the AFC’s No. 1 seed.

Manning was methodical in a 23-16 win over the Pittsburgh Steelers in the divisional round.

It was Manning’s third win in four conference championship games against his rival, Tom Brady, who is 10-3 against Manning in the regular season.

While Manning was sidelined, several unsubstantiated reports painted the face of the league as a bad teammate or a cheat. The NFL Network alleged he would refuse to serve as Osweiler’s backup once healthy and Al Jazeera reported Manning obtained HGH from an anti-aging clinic in Indianapolis, although his accuser recanted.

The NFL said it’s conducting a comprehensive review of the HGH allegations, a probe that’s not expected to be complete until after the Super Bowl.

Manning angrily denied using performance-enhancing substances and called the report “complete garbage.” He also called on the league to investigate the claims as soon as possible.