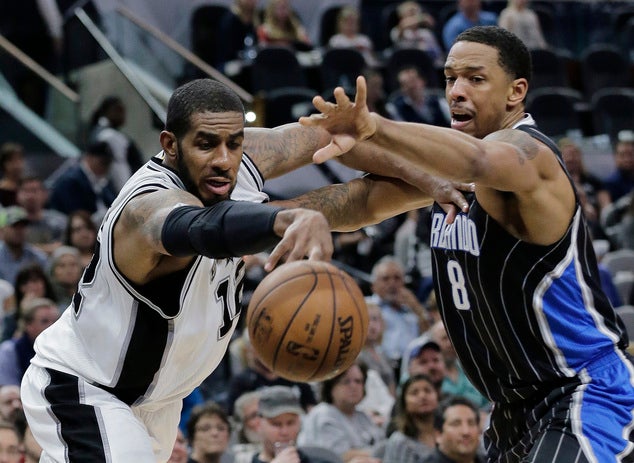 SAN ANTONIO — LaMarcus Aldridge set the tone for the San Antonio Spurs, and helped them remain undefeated at home this season.

Aldridge scored a season-high 28 points and Patty Mills matched his season high with 22 points as the Spurs overcame a dogged effort from Orlando to beat the Magic 107-92 Monday night.

“It was LaMarcus from the get-go that we all kind of fed off of,” Mills said. “How he was playing. Me and Kyle (Anderson) definitely fed off that. Great job from LaMarcus in his leadership tonight. Playing off his confidence (and) them having to adjust to him and opening up for other people.”

San Antonio has cruised to lopsided victories in many of its home games, but struggled against Orlando.

“It would have been a moral victory if we won, and I really thought we were going to,” Magic forward Aaron Gordon said, “but the ball didn’t bounce our way.”

Orlando lost for the 13th time in 15 games despite 20 points and 10 rebounds from Nikola Vucevic. Victor Oladipo added 19 points and Aaron Gordon had 12 points and 16 rebounds.

The Magic had 19 offensive rebounds while finishing with a 51-42 rebounding advantage.

“Just trying to make those effort plays,” Vucevic said. “It was very important that we get rebounds. I don’t know how well of a shooting night we had, but it wasn’t really good all the time and those extra possessions can really help you boost your energy.”

San Antonio found its defensive footing late in the third quarter, using a steal by Mills and blocks by Kawhi Leonard to separate from Orlando. The Spurs outscored the Magic 24-8 to overcome a 70-69 deficit with 1 1/2 minutes left in the third quarter.

The season-high scoring by Mills and Aldridge were needed to extend San Antonio’s home winning streak to 35 overall.

“It wasn’t (one of) our best games,” San Antonio guard Manu Ginobili said. “But one of the virtues of having a deep team is that one night Kawhi can win it for you, another day it’s David West; tonight it was Patty Mills and Kyle Anderson, and LaMarcus, too. We always, almost always, find someone to respond.”

San Antonio opened the game on a 12-0 run fueled by 3-pointers from Leonard and Danny Green and two turnovers by Orlando.

Aldridge made his first four shots in scoring 14 points in the opening quarter as the Spurs’ inside-out game worked to near perfection.

The Spurs matched a season-high with 35 points in the opening quarter, but perhaps it was more fitting that they gave the points right back on the night they celebrated the notoriously defensive-shy Hall of Famer George Gervin.

Orlando went on an 11-0 run bookended by 3-pointers by Channing Fry and Elfrid Payton.

Magic: Vucevic has 151 career double doubles, including a team-high 22 this season. … The Magic did not win their 21st game last season until March 8. … Orlando has had five or more players score in double figures in the same game on 29 occasions.

Spurs: San Antonio won its 35th straight home game, moving into sole possession of sixth place in league history. The Philadelphia 76ers are fifth overall, having won 36 straight from January 1966 to January 1967. … The Spurs matched their best start in franchise history after 48 games, equaling the mark set in 2011. … San Antonio is 18-4 against the Eastern Conference this season.

Gervin received a standing ovation from the sell-out crowd at the AT&T Center when he was honored for his contributions to the Spurs on “Ice Night.”

Gervin averaged 25.1 points per game over 15 seasons in the ABA and NBA, including 12 with the Spurs.

At 6-foot-7, Gervin helped popularize the use of taller players at guard to take advantage of defensive mismatches. But while “The Iceman” was known for his silky moves and finger roll jumpers, Gervin’s notion of defense was to outscore whoever was guarding him.

Given his aversion to defense, could he have played under current Spurs coach Gregg Popovich’s defensive-minded system?

Orlando will visit Oklahoma City on Wednesday in a rematch of their double-overtime loss on Oct. 30. The Thunder defeated the Magic 139-136 when Kevin Durant blocked Oladipo’s 3-point shot with 1.9 seconds remaining in double overtime.