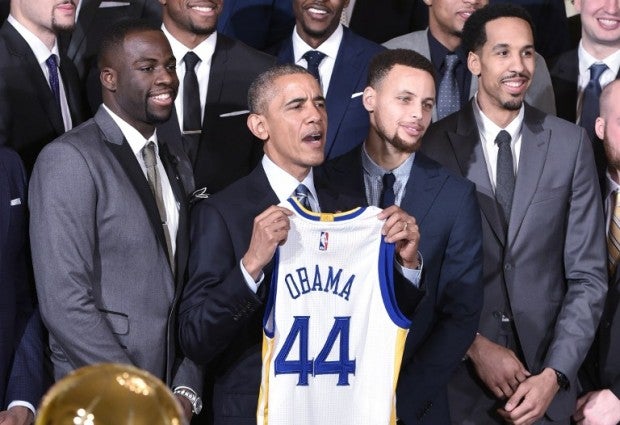 Obama is a big basketball fan and played golf with Curry and his father, former NBA standout Dell Curry, last August while on vacation.

“Steph was using the excuse of Secret Service being intimidating for why he lost the match. That is not the case,” Obama said. “But he will have another opportunity.”

Obama said he was disappointed not to see Riley Curry, the young daughter of the reigning NBA Most Valuable Player who charmed the cameras during her father’s post-game news conferences during last June’s NBA Finals.

“I was hoping that Riley Curry would be here today to share the podium with me, but I guess I’m going to have to get media training some other day,” Obama said with a smile.

Obama acknowledged Warriors coach Steve Kerr, whose five NBA titles as a player included three from 1996 to 1998 as a guard alongside Michael Jordan for the Chicago Bulls, Obama’s team.

“It’s rare to be in the presence of guys from the greatest team in NBA history, so we’re pretty lucky today because we’ve got one of those players in the house,” Obama said.

Kerr was on the Bulls’ 1995-96 squad that went an NBA-record 72-10 and the following season’s team that went a second-best 69-13. Now the Warriors team he coaches is a threat to both marks.

Kerr, who guided Golden State to a crown in his first season on the sidelines but missed the start of the current campaign due to back surgery, returned only two weeks ago, after the Warriors had opened 39-4, the second-best start in NBA history, under fill-in Luke Walton.

“Unfortunately, the NBA won’t let Luke count those wins as his own. Which, man, that doesn’t seem fair,” Obama said.

“You defied the cynics, you accomplished big things, you racked up a great record, and you don’t get enough credit,” Obama added, then pausing for a beat as the similarity to his political situation hung in the air.

“I can’t imagine how that feels,” he deadpanned, to laughs from the crowd.