Rousey says people on the Internet are ‘mostly evil’ 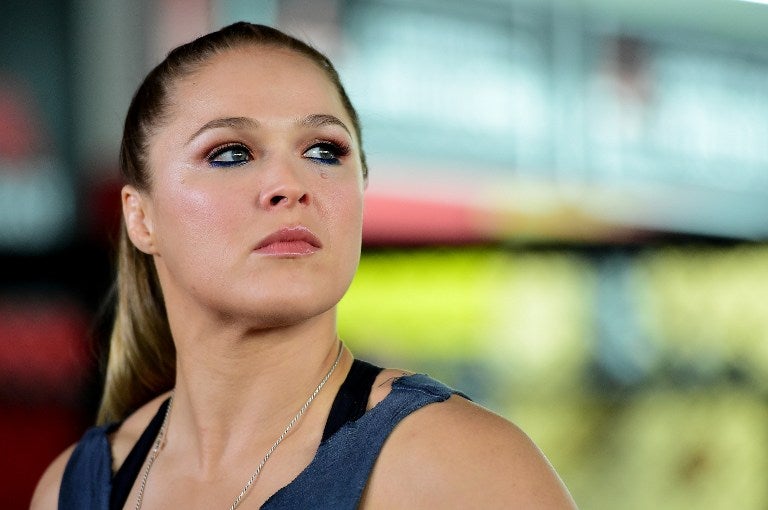 FILE — Ronda Rousey speaks to media at a press conference leading up to her fight against Holly Holm in UFC 183 at the Glendale Fighting Club on October 27, 2015 in Glendale, California. Harry How/Getty Images/AFP

Ronda Rousey knows what it’s like to take the heat from social media especially after her shock loss to Holy Holm last year.

Instead of addressing the comments head on, Rousey prefers to just look the other way.

“I just use social media to put information out there, but I really don’t use it to receive it because people are really cruel with that access. I don’t want to allow them that access to me anymore because they really take it for granted and they don’t look at you like a person, you’re an event to them. I don’t want want to read people saying all the worst things they can imagine about me every single day. I just put what I have to put out there, out there and I don’t look at anything else.”

Rousey, known for her brash attitude, was the subject of the worst knockouts in UFC history losing her women’s bantamweight title to Holm in UFC 193.

Her turnaround from an immaculate protagonist to a destroyed villain was as quick as her one-round finishes and it was well documented on social media.

This resulted Rousey to minimize her activity on the Internet.

“I never used social media until it was to help me with work; until I was hustling and trying to get people to catch on to this whole women’s MMA thing. It’s only been something for work for me,” Rousey said. “Except in the Myspace days, which all I used that was to put pictures out and tell jokes about things that people take totally out of context now. I’m like, ‘Why did I do that?’ Because I thought I had like 12 friends and they all got it and I’d never be famous, who cares? I don’t really use social media for fun except to look at clothes I like or photography I like.”

Rousey prefers it old school–personal interaction or the basic methods of calls and texts.

But that’s if you know her and she knows you personally.

“But the actual social part? That’s the same as searching through the internet, to be honest. I use social media like I use Google Images, it’s not really a void in my life and I don’t miss it at all,” Rousey said. “If I’m going to socialize with somebody, it’s going to be in person. If you know me, you can call me or text me and if you don’t know me well enough to have my number, well, then you shouldn’t be talking to me anyway.”

Since the lone loss of her career, Rousey went somehow under the radar–and she wants it that way.

“I’m being purposely mysterious right now because I think people have taken my availability for granted. I’m kind of just wanting to disappear. Everyone is constantly keeping me under a microscope and I just kind of want to be left alone right now.”