Ginebra beats Star in another thriller 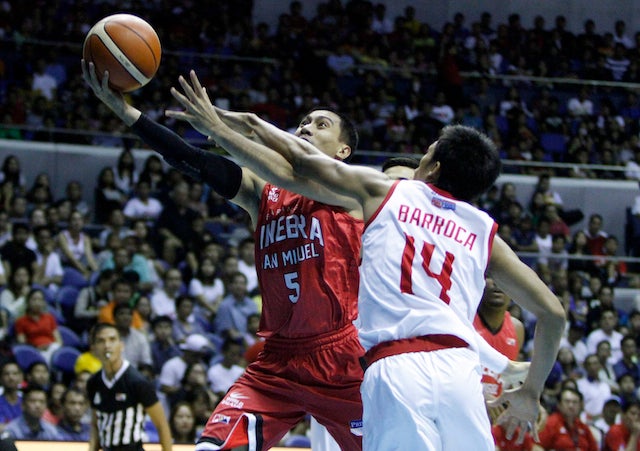 Tenorio stopped and popped near the free throw line after blowing past Mark Barroca that put the Kings ahead, 89-87, with 28.8 seconds left.

“It’s fun when a game lives up to its hype,” said coach Tim Cone. “Manila Clasico is such a big game through the years, we only get it once per conference, so it’s really fun if it lives up to the hype and has a great game on both sides.”

Rafi Reavis gave the Hotshots an 87-85 lead with a couple of freebies, but Greg Slaughter knotted the score with a putback and helped stop Denzel Bowles on the other end that paved the way for Tenorio’s clutch basket that sent 16,126 fans rocking.

Slaughter sealed the deal with a three-point play after Bowles blocked Mark Caguioa with 9.4 ticks to go.

“The good news for our team is we settled, didn’t panic, and worked our way back to the game. That means we’re growing up a little bit,” Cone said. “Down the stretch, good things happen to us and bad things happened to them and it just went that way. For me, this is a special game that we were able to come back and pull it out.”

Othyus Jeffers led the way with 23 points, 15 rebounds, and seven assists to bring Ginebra in even ground at 2-2.

Japeth Aguilar went for 15 markers, all in the first half, and five rebounds, while Slaughter had a double-double with 14 points, seven in the final frame, and 12 boards on top of two blocks. Tenorio wound up with 12.

Ginebra spoiled Barroca’s amazing night, where he had a blazing 14-point third quarter that put the Hotshots up, 74-66 at the end of the period.

“Mark does what Mark does in big games. He came down and hit big shots at the end of our third quarter,” said Cone. “They shot the ball extremely well and they moved the ball well. Denzel (Bowles) was unselfish in kicking the ball out and I thought (Star coach) Jason (Webb) made a great adjustment at halftime with a big lineup, and that kind of through us off-balance and we didn’t know how to attack.”

Barroca finished with 16 points in the defeat as the Hotshots fell to 1-4.

Bowles was limited to just 15 markers and eight rebounds but he did have five assists, and four blocks, while Peter June Simon scored 14 points.