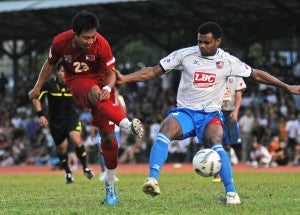 The Airmen went 3-1 up at halftime, thanks to two goals from Araneta and Yanti Barsales before cruising the rest of the way in their Group E clash at the University of Makati pitch.

Araneta scored on a header off a Jaylor Soriano cross in the 18th minute, before Laos equalized five minutes later through Johnny Dalman, who capitalized on a miscue by Air Force keeper Edmundo Mercado.

Barsales restored the lead with a volley off a corner, before another cool finish from Araneta from a tight angle in the 42nd minute sent Air Force on its way.

Over at the Alabang Country Club, Izo El-Habbib scored all three goals as Global FC gave new coach Graeme MacKinnon a winning start to his UFL career with a 3-0 blanking of Queen City Cebu.

It was a resounding response from Global, a week after absorbing a shocking 2-3 loss to Stallions in bracket C, considered as the tournament’s group of death.

Pachanga further muddled up the standings with a hard-earned 2-0 victory over Stallions, who finished the game with 10 men after striker Jovanie Simpron was sent off early in the second half for violent conduct.

Joven Bedic and Christopher Ojamire struck for Pachanga, which faces Global this weekend in another crucial encounter.

Title contenders Army and Navy also stamped their class against their respective rivals.

Nomads, a quarterfinalist last season, debuted with a 2-0 win over Lions in Group A, while Agila dumped Internacionale, 5-1, in Group B play.

Schwarz needed an 83rd minute strike from Laurence Gatasi to salvage a 1-1 draw against ABC Stars in Group D.