Getting last minute-instruction from racing legend and father Jovie.

Don’t be fooled by Janelle Kristin Saulog’s ways. Outside of her easygoing demeanor, Saulog’s story is about dedication, hard work, and the heart to excel.

She’s not the country’s number one lady motocross rider for nothing.

A recent graduate of sports science from the University of Santo Tomas, the 5-foot-4 Saulog reinforced her hold as the Philippines leading driver after ruling the initial leg of the 2016 Diamond Motocross Series at the Mx Messiah Fairgrounds recently at Taytay, Rizal.

‘‘I’m into motocross because I’m happy doing it. It’s enjoyable and thrilling,’’ said the 24-year-old Saulog during an exclusive interview in Makati City.

Just like other riders, men and women alike, Saulog, who rides Honda 450 borrowed from boyfriend and fellow top notch rider Ralph Ramento, isn’t free from spills and other unfortunate incidents while negotiating the jumps and the bumps.

‘‘I have my own share of spills, but thanks to the Lord, I have not suffered broken bones. When I race, I focus on the race and nothing else,’’ said Saulog.

She also takes care of her mother Annalie, who is recovering from illness, at home. 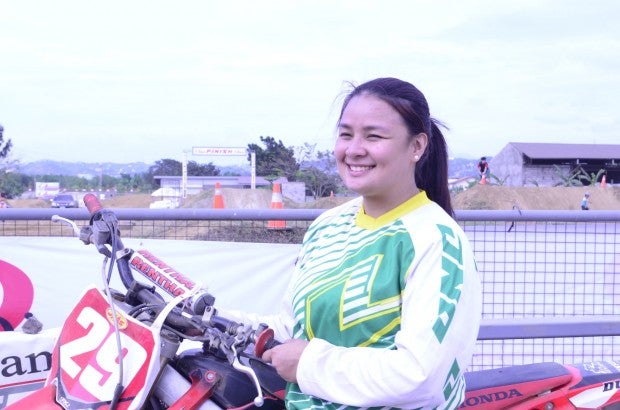 Saulog said she prepares for every race by going to the gym to build her upper body strength. She also focuses on cardio workouts.

Though she has already earned her degree to the delight of her parents, Saulog is not planning on practicing sports science yet and instead wants to focus on motocross.

‘‘Before, I have to go back to Manila after provincial racing because of my studies. Now I can fully concentrate in winning races,’’ said Saulog, who thanked Xtreme Adrenaline Sports headed by Sam Tamayo of the Generation Congregation and sponsor Diamond Motors courtesy of Jon Blaylock, marketing and corporate planning head, for organizing the recent series.

‘‘Veterans and new riders just want to race. If there are no races, then we’re also going to suffer,’’ said Saulog, who is being supported by JMS Motorcycle Shop, Sorento Sunwear, Booster-C Energy Drink, Shaders Glass and Aluminum and New Bay Auto Shop.

Like the rest of her fellow competitors, Saulog said motocross needs the support of corporate sponsors in order to grow.

Lack of sponsors has prevented Saulog from competing outside the country. ‘‘I’d love to compete abroad, that will be the biggest thrill. Hopefully, a big company will come in and sponsor local riders.’’

Elder sister Janna, 25, is a pre-school teacher connected with an international school at the Bonifacio Global City.

But Janna, unlike Janelle, has no passion for riding other than teaching and designing shoes for celebrities. Too often, people associate women sporting aces as tracksters, gymnasts, basketball players, volleybelles or even boxers.

Everybody knew that Janelle was raised on images of motocross because her father Jovie belonged to the rare breed of men who dominated the sport during the 80’s and 90’s.

Jovie, now 50, is still active in racing although an accident sidelined him this year. He is Janelle’s official sidekick, making sure that his daughter has the right gear, attitude and tactics every race.

‘‘If my daddy tells me not to race, I won’t race. He also understands if sometimes I cannot do so many things on track,’’ said Saulog.

But it will be foolhardy to expect the elder Saulog, whose father Jose was once-famous to ‘‘Bayang Karerista’’ as Jockey Saulog, to prevent his daughter from racing. Up to now, Jovie finds the screaming engines music to the ears, the fiesta-like atmosphere invigorating and the jumps exhilarating.

A six-time Rider of the Year during his prime, the elder Saulog, after all, was responsible for opening the mind of Janelle to the beauty of motocross.

She became a regular watching her father compete, never forgetting the images of the gallant men covered in dust trying to outdo each other as the fans roared in utter satisfaction.

‘‘Yes, I want to please the audience, but I can also please them by winning,’’ said Saulog, who also competes against the men in the novice division.

She sees a brighter future for ladies competing in motocross.

Saulog points out Nueva Ecija’s Pia Gabriel, 19, and other lady riders like Mia Villalon and those from Mindanao and other provinces.

As it turned out, there’s another Saulog in the making. Xyxy Maximo is only seven but has already competed against Saulog and company, the most recent was during the five-leg Diamond Motocross Series.

Janelle’s next stop is the Strawberry Motocross Festival in La Trinidad Benguet, a motocross in Abra and Iba, Zambales before plunging into action on April 2 for the second leg of the Diamond Motocross series.

Ladies and gentlemen, rev up your engines!