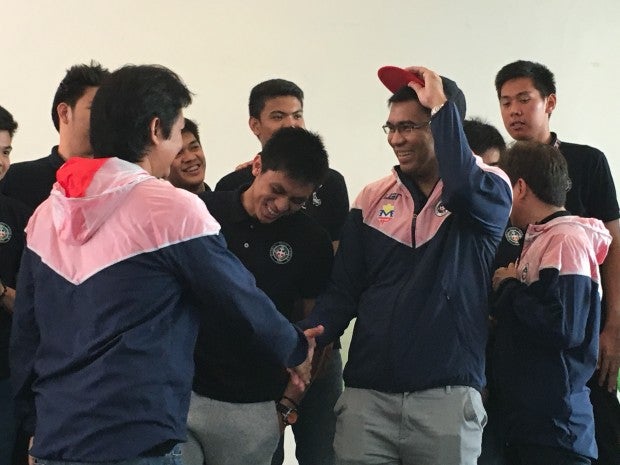 Most first-timers would’ve shied away from the pressure but Jeff Napa, a rookie head coach in the collegiate level, went right at it.

Napa accepted the head coaching position at Letran due to the challenge it presents.

The Knights are coming off their first championship in 10 years under a first-time coach and Napa is taking over a team that had lost two of its biggest stars to graduation.

“The biggest factor for me accepting the job is that it will be very challenging because they just won a championship and the NCAA is a very competitive league,” Napa, who was unveiled as the Knights new head coach on Tuesday at Salon de Actos at the Letran campus in Intramuros, Manila, told reporters.

The 35-year-old Napa admitted the loss of Mark Cruz and Kevin Racal, who are now playing in the PBA, is be big but he is confident the holdovers will be able to collectively fill the void.

His focus, though, won’t be on who the team used to have but rather who he has under his disposal and maximize their talents — the same blueprint he used in leading the National University Bullpups to three championships in five seasons, including last Friday’s.

READ: Bullpups’ Napa takes over from Ayo at Letran

“I don’t think about the players this team lost. What I’m thinking of is that the current players can fill their roles. I’m also used to having a team without any superstar,” Napa said. “In NU, I really maximized the talents of my players.”

Napa will be inherit a team that will be led by the core of Rey Nambatac, McJour Luib, Jomari Sollano and Felix Apreku.

“Actually, we have similarities. Letran is a talented team and I just need to maximize it.”

Napa, who also served as an assistant coach for Bulldogs for 10 years, doesn’t want to guarantee anything other than his team working hard and players playing true to their capabilities to win.

“This is really a big challenge for me because Letran has a rich winning tradition. I’m ready for the challenges that will come. I don’t want to promise anything but one thing I’m sure of is that I will work hard.”