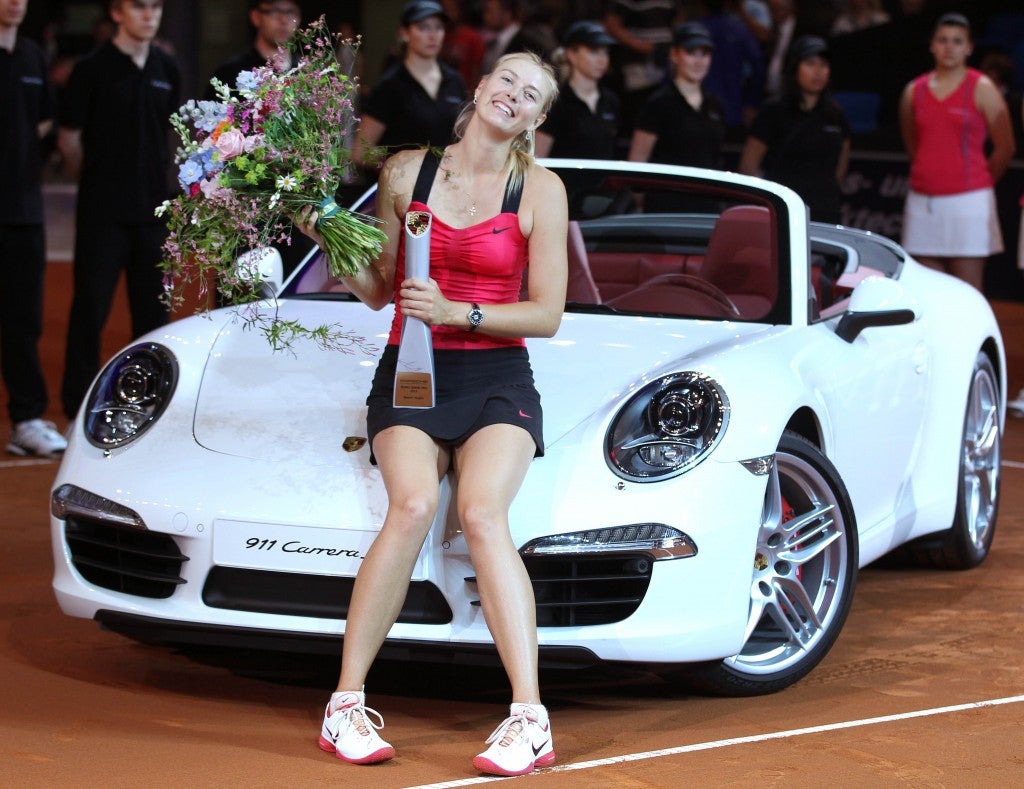 In this April 29, 2012, file photo, Russia’s Maria Sharapova sits on the Porsche Carrera she won after beating Belarus’ Victoria Azarenka 6-1, 6-4 in the final of the Porsche Tennis Grand Prix in Stuttgart, Germany. Three of Maria Sharapova’s major sponsors are cutting ties with the Russian tennis star after she acknowledged failing a doping test at the Australian Open. Sportswear giant Nike, Swiss watch brand Tag Heuer and German luxury car company Porsche moved quickly to distance themselves from the five-time Grand Slam winner after she announced the positive test at a news conference in Los Angeles on Monday, March 7, 2016. AP

MOSCOW, Russia — Nike and other sponsors swiftly distanced themselves from Maria Sharapova on Tuesday after the world’s highest-earning female athlete outed herself as a longtime user of a recently banned drug.

Swiss watch brand Tag Heuer and German luxury car company Porsche quickly followed the sportwear giant, suspending their support of the five-time Grand Slam winner after she announced on Monday that she took meldonium at the Australian Open in January, days after the substance was banned.

Many other athletes have attacked the messenger, challenged the results or blamed others after being confronted privately by positive tests for banned drugs. Sharapova went public instead, taking full responsibility and effectively throwing herself at the mercy of the International Tennis Federation.

“I know that with this, I face consequences,” Sharapova said, waving away a question that invited her to blame her doctor or someone else on her team.

“I have to take full responsibility because it’s my body and it’s what I put into my body and I can’t blame anyone but myself,” she said. “At the end of the day everything you do is about you.”

The former world No. 1 could face a lengthy ban, possibly ending her season and preventing her from competing for Russia at the Olympics in Rio de Janeiro.

Much more costly would be losing the advertising revenue that has made her the top earning female athlete for 11 straight years, according to Forbes.

“We have decided to suspend our relationship with Maria while the investigation continues,” Nike said in a statement.

TAG Heuer said it has abandoned talks on renewing its sponsorship, which expired in December, “in view of the current situation.”

Porsche said it has “chosen to postpone planned activities” with Sharapova “until further details are released and we can analyze the situation.”

And Evian, the water company, said it “will follow closely the development of the investigation.”

Industry veterans were surprised by how quickly these companies backed away from such a bankable performer. Sharapova earned an estimated $29.5 million last year alone, the vast majority off the court.

But marketers have become more sensitive to doping scandals after the public denials of athletes such as Lance Armstrong or Barry Bonds, especially in the age of social media.

“Waiting around makes a brand look indecisive,” said branding expert Allen Adamson, founder of Brand Simple Consulting. “When in doubt, you don’t want to be connecting your brand with an athlete who has not played by the rules.”

Still, none of Sharapova’s sponsors have cut ties altogether, and other athletes have rebounded from scandals: Nike stuck with Tiger Woods after he apologized for cheating on his wife, and welcomed back Michael Vick after he served time for an illegal dog fighting ring.

Though Sharapova did a “textbook” job of owning up to her mistake, questions linger, including whether she listed the drug among her medications when she was tested in Australia, said Paul Swangard, who lectures at the Warsaw Sports Marketing Center at the University of Oregon.

Answering those questions could determine how quickly Sharapova, 28, can return to competition, which would be her best way of quickly rebuilding her image, Swangard added. “If she is banned at the age that she is at, she might not have a chance to use her playing ability to rebuild her credibility.”

Sharapova has dropped to No. 7 in the WTA rankings, and due to injuries, she has played just three tournaments and the Fed Cup final in the last eight months since Wimbledon.

This raises the possibility that sponsors may have acted quickly in part because her brand isn’t as strong now, said Manish Tripathi, assistant professor of marketing at Emory University’s Goizueta Business School.

“If she was playing the way Serena Williams is playing right now, Nike wouldn’t have acted this quickly,” Tripathi said.

“The fact that she got out in front of it and continues to be apologetic and up front and proactive about drug testing will make it easier for her. But the big thing she has to do to get over this is win something,” he said.

The World Anti-Doping Agency banned meldonium starting this year because it aids oxygen uptake and endurance. Sharapova, who said she has taken meldonium for 10 years for health issues, said she neglected to click on a link in a late December email to check the new list of banned substances.

“I let my fans down. I let the sport down that I’ve been playing since the age of 4, that I love so deeply,” Sharapova said. “I don’t want to end my career this way, and I really hope I will be given another chance to play this game.”

Born in Siberia, Sharapova was just 5 when she was discovered by Martina Navratilova. She and her father had just $700 on hand when they moved to Florida to train her for tennis stardom. The lanky blonde won Wimbledon, her first Grand Slam title, at 17, and the endorsements came rolling in.

Sharapova now has 35 career singles titles and more than $36 million in career prize winnings. But her endorsement deals and extensive business ventures, including a high-profile candy line, Sugarpova, dwarf what she earns on the court.