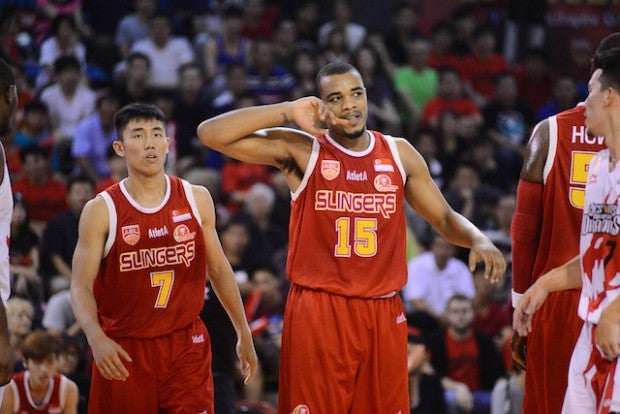 KUALA LUMPUR — Xavier Alexander nearly had a triple-double while Fil-American Kris Rosales shone down the stretch and Singapore stunned Westports Malaysia, 84-80, and its rabid hometown crowd in Game 1 of the 2016 ASEAN Basketball League Finals at MABA Stadium here.

Calm under duress, Alexander let out a loud scream while wrapping the ball around his arms in the game’s final possession, but throughout the game, the American import let his game do the talking.

He scored his team’s first two points on an in-your-face dunk over Calvin Godfrey and finished with 27 points, 15 rebounds, nine assists, five steals and two blocks without taking a second of rest.

Rosales was reduced to a mere a spectator, so were the rest of his team, to the blinding shooting display from Fil-Canadian Matthew Wright in the first half but the Fil-American guard proved his worth when it mattered most.

Rosales had 13 points, three assists and a steal while playing hairshirt defense on Wright, who was silenced to just two points on 1-of-5 shooting from the field in the last two quarters after lighting up the first half with 20.

“My main focus was to shut down Matthew or whoever I was guarding, it didn’t matter and I think defense is really a big part of the success of our team,” Rosales said.

Game 2 is on Sunday with the Slingers, who rose from 13 points down, 51-38, in the third quarter, stealing homecourt advantage.

Wu Qingde sealed the win with a 3-pointer, 84-80, from the right corner off a drive and kick by Alexander with 12.9 seconds left. Rosales gave Singapore an 81-77 cushion on a jumper with 45.2 ticks remaining.

Justin Howard, the awkward but effective Slingers import, had 26 points and 11 rebounds while also doing the dirty work.

Reginald Johnson posted 20 points and 15 rebounds for the top-seeded Dragons but tired out in the crucial stages with Godfrey saddled by foul trouble majority of the game.

Fil-American playmaker Jason Brickman added 17 points, six assists and three steals for Malaysia, which is now in a must-win situation on Sunday as the series shifts to Singapore for Game 3.

The Dragons were still leading, 69-66, after a Brickman triple over Alexander from the top of the key at the 8:45 mark of the fourth quarter.

But that turned out to be Malaysia’s last field goal in the next five minutes and 27 seconds as the Slingers went on an 11-0 run.

“I didn’t make the right adjustments in the second half that’s why we lost,” said Westports Filipino head coach Ariel Vanguardia.