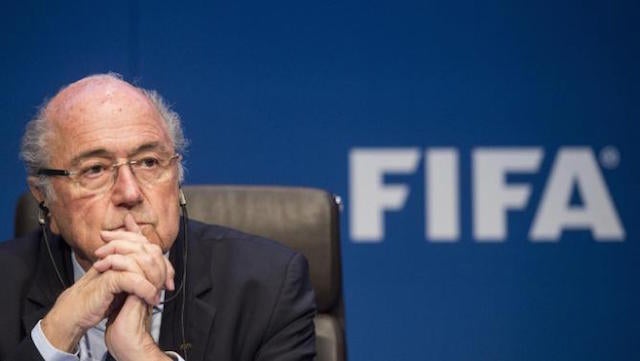 Finally dealing with a key complaint about the former FIFA leadership, led Sepp Blatter’s secret pay deal was revealed to be $3.76 million in 2015.

Blatter would have earned more but he got no performance bonus as soccer’s embattled governing body reported a loss of $122 million for a year marred by a corruption crisis.

Infantino and his executive colleagues signed off on the accounts just as the Court of Arbitration for Sport confirmed Blatter filed his appeal against a six-year ban from soccer for financial conflicts of interest. CAS said Blatter seeks to annul the ban.

Yet another dramatic day for FIFA was capped when Blatter was joined under formal criminal investigation by his long-time right-hand man Jerome Valcke, who was fired in January.

Swiss federal prosecutors said they “conducted searches and interviews” and opened a case against Valcke for suspected “criminal mismanagement.”

Still, Infantino has no responsibility for the legal problems confronting the long-time public faces of FIFA.

Elected last month to revive FIFA, Infantino is likely to use his first formal news conference on Friday to set the scandal-scarred organization on a new path.

Dealing with the past on Thursday meant disclosed the disgraced former FIFA president’s pay package three weeks after his employment officially ended.

Blatter, who was suspended on full pay last October and later banned for unethical conduct, had a base salary of 2,964,379 million Swiss francs ($3 million) but no bonus in 2015. The total included a payment of almost $450,000 in “variable compensation” — a long-service entitlement for reaching 40 years employment at FIFA.

FIFA’s loss, its first since 2002, was expected after failing to sign any new World Cup sponsors.

That helped ensure that FIFA’s reserves fund fell by $183 million to $1.34 billion.

FIFA spent $27.9 million last year paying executive committee members and senior management, including Blatter and Valcke, who got 2.125 million Swiss francs ($2.2 million). That total had been $39.7 million in the successful 2014 World Cup year.

“With the recently approved reforms, I believe that we have turned a corner and that FIFA is poised to emerge stronger than ever,” Infantino said in a statement.

FIFA has acknowledged that potential commercial partners were put off by fallout from the scandals.

Top-tier sponsors Sony and Emirates Airlines have not been replaced since the 2014 World Cup, and 27 of 34 commercial slots remain unsold for the 2018 tournament in Russia.

FIFA wants to keep Infantino’s pay package secret for one more year until the 2016 accounts are published. His salary will be less than Blatter’s, and should also be less than the yet-to-be appointed secretary general who will succeed Valcke and have wider, CEO-like decision-making powers in the modernized FIFA structure.

Cuts in staff bonuses from the World Cup appear to be reflected in FIFA’s total wage bill. In 2015, FIFA added 108 employees, giving the body a total of 582, yet “personnel expenses” fell by more than $23 million to $92 million.

FIFA’s legal costs soared in 2015, mostly because it retained American legal firm Quinn Emanuel. Its priority is to help prevent FIFA from being indicted as a co-conspirator in bribery by the U.S. Department of Justice.

FIFA also paid only $3.85 million in tax, mainly on profits earned by subsidiary companies. Its tax bill was $36 million in 2014 when the annual profit was $140.7 million.