Shaq to Kobe: Give me 50 points in your last game | Inquirer Sports
Close
menu
search

Shaq to Kobe: Give me 50 points in your last game 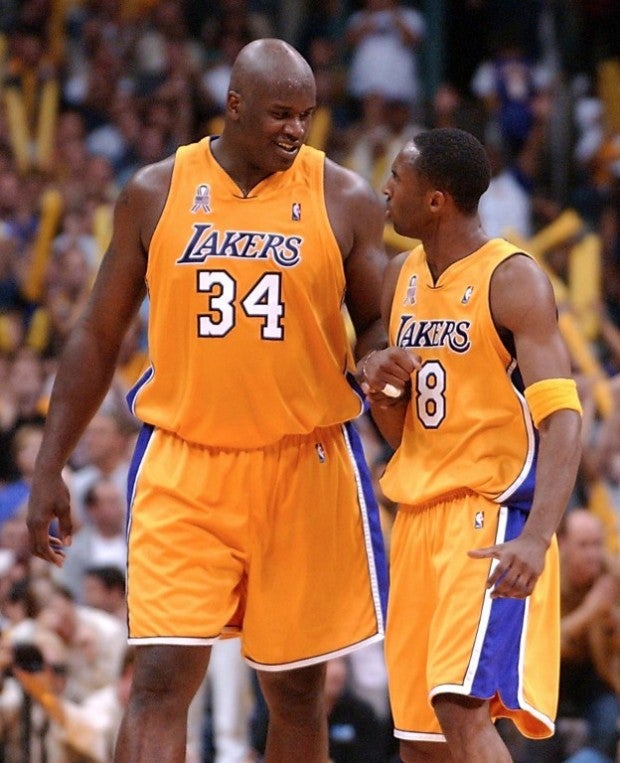 Shaquille O’Neal (L) smiles at teammate Kobe Bryant (R) of the Los Angeles Lakers during the 2nd half of Game 6 of the Western Conference Finals against the Sacramento Kings at the Staples Center in Los Angeles 31 May 2002. The Lakers defeated the Kings 106-102 to tie the best-of-seven series 3-3. AFP PHOTO/Lucy NICHOLSON / AFP / LUCY NICHOLSON

For the earlier part of the 2000s, the Staples Center had been Kobe Bryant and Shaquille O’Neal’s hallowed grounds as the Lakers duo won the NBA’s first three-peat from 2000-2002 since the Chicago Bulls did so from 1996-1998.

As befitting of their time together in Los Angeles, O’Neal challenged Bryant to put a big 50 mark next to the Black Mamba’s name in the scoresheet for his final game at the Lakers’ home court versus the Utah Jazz.

“Kobe, they’re doing a big celebration for you the last game,” O’Neal told Bryant at Inside the NBA after the retiring guard scored 20 in the Lakers’ 107-100 win over the Grizzlies. “A lot of us are going to be there. Can you promise me one thing?”

To be fair Bryant does have 25 50-point games in his Hall-of-Fame-worthy career and 15 of those were put up at Staples Center, the most iconic one being his 81-point game against Toronto in 2006.

Bryant, though, did most of it during his prime when loose-fitting jerseys were still in style.

“Uh, no,” Bryant told his former teammate laughing. “No. Absolutely not.”