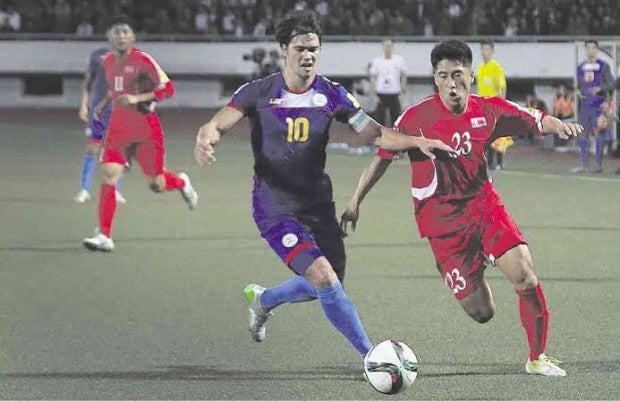 THE PHILIPPINE Azkals seek to finish their World Cup Qualifying campaign on a positive note as they shoot for an upset against North Korea Tuesday at Rizal Memorial Stadium.

The match kicks off at 8 p.m. with the Azkals looking to finish their campaign with a flourish after a run of poor results led to their early elimination from football’s most prestigious tournament set in 2018 in Russia.

The Azkals have lowered their target to reaching the Asian Cup in the United Arab Emirates in 2019 and a victory will help seal third place in Group H which would also mean qualification to the third round of Asian Cup Qualifying.

Bahrain is in third spot in Group H with nine points, but the Middle East side faces top-ranked Uzbekistan in Tashkent also on Tuesday.
A win by Uzbekistan and the Philippines will mean the Azkals finish third in the group.
But the Azkals, as they have always been in the past when facing the powerhouse sides in the continent, are once again faced with difficult odds as they try to pull off the feat without stars Phil Younghusband and Stephan Schrock.

But Misagh Bahadoran, who is the team’s leading scorer in WCQ with two goals, and Manny Ott will return from suspension, boosting coach Thomas Dooley’s severely depleted side that proved tough to crack in the 0-1 defeat to Uzbekistan in Tashkent last Thursday.
One thing going for the Azkals has been the form of goalkeeper Neil Etheridge who produced a string of saves against the Uzbeks to keep the Azkals in the game even after going down to 10 men just nine minutes into the match.

Not only is North Korea coming in with the same powerhouse side that has collected nine more points than the Azkals with 16 in the group.
The visitors also have the luxury of having an extra training session than the home side which traveled 24 hours from Tashkent and arrived only late Saturday.

Nonetheless, Dooley expressed optimism that his side will finally end its five-match winless spell.

“We would like to end the group stage with a win and the team is very positive,” Dooley said. “They players are focused.”

The Azkals picked up a point by holding North Korea to a scoreless draw in Pyongyang last October. But taking the full three points in Manila would prove special as the Filipinos have yet to beat North Korea in their last two meetings, including in the 2012 Challenge Cup in Nepal where the Koreans prevailed, 2-0.

“We are looking forward to making history,” said Azkals manager Dan Palami. “We want to continue the hard work against Uzbekistan.”