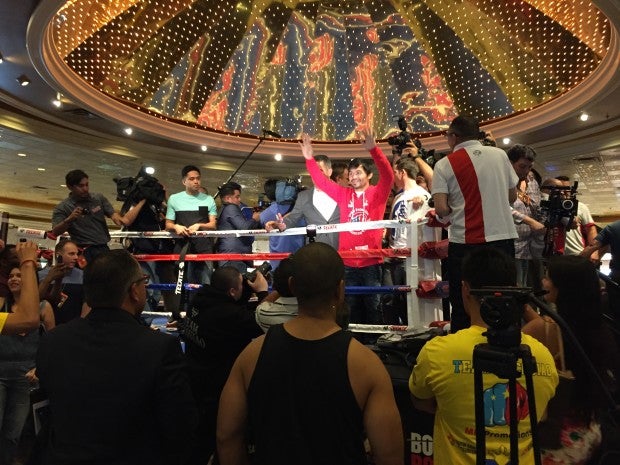 Warm reception for Manny Pacquiao at the boxers’ grand welcome at MGM Grand in Las Vegas. Photo by Celest Colina/INQUIRER.net

LAS VEGAS—Several times the crowd broke into chants of “Manny! Manny!” as Manny Pacquiao made his way to the MGM Grand for the formal welcome of boxers here Tuesday afternoon.

The boisterous and warm welcome was a stark contrast to the one that happened about two hours earlier, when Timothy Bradley Jr. arrived at the hotel lobby.

The crowd, though lively, wasn’t as raucous, with a fair amount of cheers and the occasional “Go Bradley” from the crowd.

Bradley promised to walk up to fans after giving a short speech in front of the crowd so he could sign autographs.

It was a gesture Pacquiao could not emulate without producing a security nightmare.

After Pacquiao alighted his custom-painted bus, fans scurried to get within reach of the Filipino boxing champion, almost mobbing him despite the steel railings and over-enthusiastic bodyguards that walled off the crowd as he walked to the makeshift ring in the middle of the lobby of the posh hotel.

It was a surprisingly warm reception for the Pacman, who proved that he can still captivate a crowd even at the tail end of his stellar career which has been recently surrounded with several issues, including a controversy that turned away sponsors and turned off fans.

Pacquiao did manage to sign autographs as bodyguards handed him boxing gloves and shirts thrust to them by fans. Others were lucky to take selfies while a group of Filipinos brought a campaign poster which said “Vote Manny Pacquiao for Senator.” Bradley, who was also escorted by trainer Teddy Atlas, managed to actually wade into the crowd for a few autographs and selfies.

“First of all, I wanna thank everybody who came out for your support to this event. If you don’t have a ticket to fight, I advise you to order pay-per-view. It’s going to be a fantastic event,” Bradley said.

Bradley said that the road to his third fight against Pacquiao was the “happiest” he ever took, in large part because of Altas.

Both boxers, who are squaring off on Saturday, promised a great night of action for the fans.

“It’s going to be a fantastic event. I’m ready to take care of business,” Bradley said. “I feel like I didn’t even train for this fight. That’s how fresh I feel. I didn’t overtrain, I’m ready to go.”

“There’s going be more action in the ring. I believe Bradley can bring more action and I believe on Saturday the fans will be happy,” Pacquiao said.