Beermen landing David not much of surprise

Agent says SMB have been in talks with veteran guard since last month
By: Randolph B. Leongson - Reporter / @RLeongsonINQ
INQUIRER.net / 08:23 PM April 07, 2016 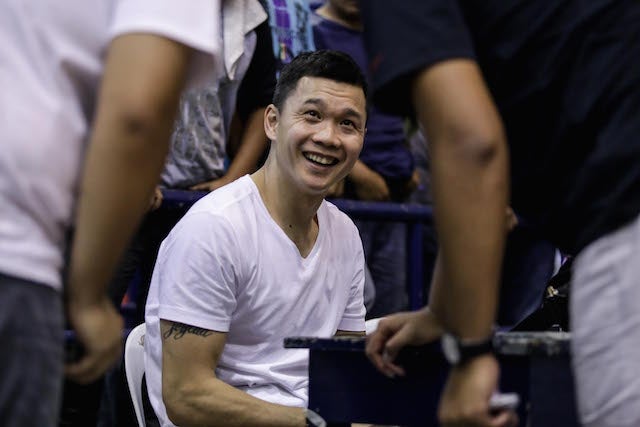 ALL SMILES. Gary David is approached by reporters during Game 3 of the 2016 PBA D-League Aspirants’ Cup Finals. David was with his manager Danny Espiritu, who confirmed his move to the San Miguel Beermen. Tristan Tamayo/INQUIRER.net

Gary David was all smiles while watching Game 3 of the 2016 PBA D-League Aspirants’ Cup Finals at Ynares Sports Arena on Thursday.

The veteran guard had every reason to after he just came to terms with the most formidable team in the league in San Miguel Beer.

David, though, stayed mum on his reported move to San Miguel as he let his manager Danny Espiritu do the talking.

Espiritu, the longtime player agent, said the Beermen management have been closely negotiating with them ever since David was relegated to the unrestricted free agent slot by Meralco last month.

“They (Beermen) have been talking to us since last month,” Espiritu said. “I’ve been asking them about Gary and the conditions if they’re interested. They didn’t need to do anything, they just need to talk to Gary and ask him if he wants to play for their team. And if Gary agrees, it’s already as good as 110% that he’s yours.”

David’s status as an unrestricted free agent allowed him to freely negotiate and talk to teams interested in his services. And thus, paved the way for his move to San Miguel.

“No trade needed. Any team can pick him up and San Miguel got him,” said Espiritu, who added there are still documents to be accomplished with the PBA Office.

San Miguel has until April 16, the day after the final game day of the elimination round, to activate David to its lineup. The Beermen can have him as early as Sunday in time for their game against Phoenix.

Once the Beermen secure David’s services, they will shoulder his standing contract with Meralco, which is set to expire at the end of the season.

Espiritu also bared several teams showed interest and explored possibilities of acquiring the four-time scoring champion, but in one way or the other, did not opt to push through.

“Other teams like the two new teams, they didn’t want to take the risk of paying David because they could be heading to an early exit. What they’re going to pay for is a big amount and they may not even make the semifinals. While other teams just didn’t want to make any change to their rosters,” he said.

Though San Miguel will provide David with a new lease on life, Espiritu acknowledges the bevy of guards the Beermen have. But he believes his player can fit in right away with the championship-contending crew.

“I’m sure Gary’s playing time won’t be that long because they are loaded with guards, but it will also depend on his performance.”

With the Beermen, the 12-year veteran has his best chance of winning his first PBA championship.