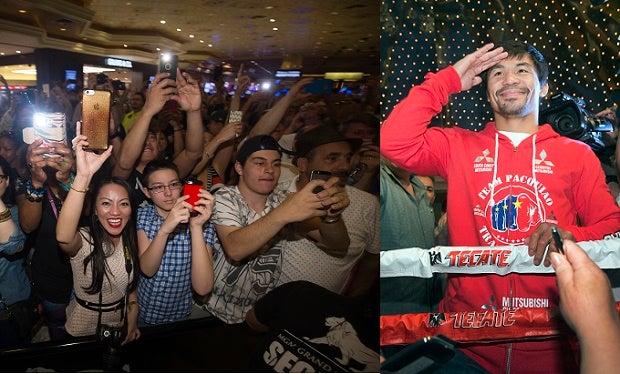 LAS VEGAS, United States — Manny Pacquiao will climb into a boxing ring for what could be the last time here on Saturday with the Filipino icon aiming to deliver an explosive finale to his glittering 21-year career against American rival Tim Bradley.

Eleven months after being outpointed by Floyd Mayweather in the “Fight of the Century”, Pacquiao has vowed to hang up his gloves to pursue a career in politics after Saturday’s welterweight bout at the MGM Grand Garden Arena.

READ: Pacquiao: One last time | Pacquiao-Bradley: What to expect

Pacquiao has said that he is treating his third meeting with Bradley as his farewell fight before returning to the Philippines to seek a seat in the country’s Senate next month, which could tee up a future tilt at the presidency.

“I’m sad because this is my last fight,” Pacquiao said shortly after Friday’s weigh-in, where he tipped the scales at 145.5 pounds before a cheering crowd of several thousand fans.

“I want to make a good fight and make the people happy. We did everything in this training camp to win convincingly.”

The 37-year-old eight division world champion has, however, refused to definitively rule out the possibility of prolonging a boxing career that has earned him around $500 million over the course of 65 often bruising battles.

‘Tough to give up’

“I cannot say that I’m not going to come back,” Pacquiao said this week, explaining that his mindset may change once he retires. “I don’t know how I’ll feel when I hang up my gloves.”

Those closest to Pacquiao, including his long-time trainer Freddie Roach and the veteran promoter Bob Arum, believe he may yet return.

Arum suspects Pacquiao may be persuaded to prolong his career if he scores a spectacular victory over Bradley, who took the Filipino to 12 rounds in each of their previous two contests.

“I think if he wins this fight well, he’s going to find a way to continue,” Arum said.

Roach, who has been in Pacquiao’s corner ever since the Filipino arrived at his Hollywood gym in 2001 looking for a trainer, described their relationship as “15 years of greatness” that he would like to see extended.

“I’m hoping it’s not his last fight because I still think he has a lot left in him,” Roach said. “There’s some interesting fights out there.”

‘Bat out of hell’

Pre-fight preparations were overshadowed by controversy in February when the devoutly religious Pacquiao described homosexuals as “worse than animals”, remarks that prompted several sponsors to terminate their deals with him while also drawing widespread outrage from gay and lesbian activists.

Pacquiao, who later apologized for causing offence while maintaining his opposition to same-sex marriage, insists the furor did not affect his training.

“There were no distractions,” said Pacquiao, who has expressed a desire to sign off in style.

“It’s really important for me to win this fight, to win convincingly,” Pacquiao said. “It’s part of my legacy.”

Bradley said he is preparing for an onslaught from Pacquiao when the fight gets under way at around 8.15 pm local time (0315 GMT).

“He’s going to come out like a bat out of hell and try to take my head off,” Bradley said.

Bradley and veteran trainer Teddy Atlas have been poring over tapes of Pacquiao’s defeat to Mayweather last year, and his crushing knockout by Juan Manuel Marquez in 2012 as they concoct a gameplan to beat the Filipino.

But Atlas is under no illusions about the scale of the challenge represented by Pacquiao.

“The combination of speed and power that he has is uncommon,” Atlas said. “He’s a freak.”