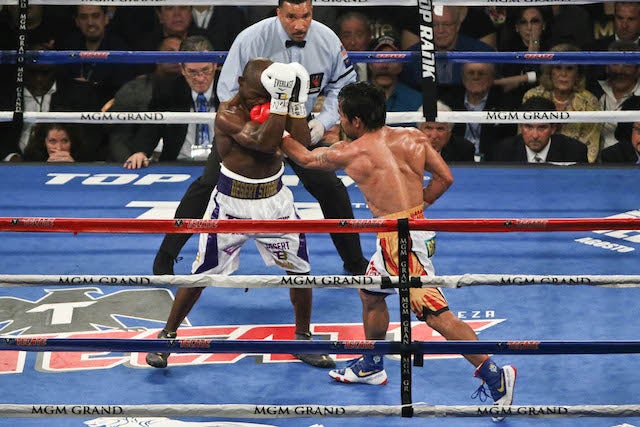 Manny Pacquiao punches through the defense of Timothy Bradley during their third fight on Saturday, April 9, 2016, at MGM Grand Garden Arena in Las Vegas. PHOTO BY REM ZAMORA

LAS VEGAS — Manny Pacquiao may no longer be a punching machine, but he’s still capable of throwing them in bunches.

Picking his spots, Pacquiao outgunned and outlanded Timothy Bradley Saturday night to bow out of the ring in style.

Though his connection rate was slightly lower (28 percent) than Bradley (33 percent) the sheer volume of his punches still gave Pacquiao the edge, 122 to 99.

It was in the jabs department that Pacquiao thrived as he threw 238, way above Bradley’s 84, and landed 30 for 13 percent.

Bradley’s jabs were few and far between (84) and were also off mark (14 percent).

Pacquiao, however, was sharper, connecting 92 of the 201 he threw for 46 percent.

As both boxers measured up each other, their activity rate plunged from their first two encounters.

Fact is, Pacquiao and Bradley threw more punches each in their highly controversial 2012 showdown won by Bradley, than their combined output Saturday.

That time, Pacquiao unloaded 751 and connected on 253, while Bradley was even busier with 839 shots, landing just 159.

The sharp drop in punches can be attributed to their mutual respect to each other’s capability, with Bradley admitting that they were “measuring up” each other.

In their 2014 rematch, Bradley was again the more active with 627 shots but landed only 141. Pacquiao threw fewer shots with 563, but was more accurate with 198 hits.