LAS VEGAS—With a minute left in the final fight of Manny Pacquiao’s career, the crowd began to rise to its feet, one section of the MGM Grand after another—until there was one huge ovation of fans cheering the name of the fighter who had thrilled audiences for 15 years.

One more time, one final time, Pacquiao heard them chanting his name.

They were egging him on to finish with a flourish. And when the bell ended 12 rounds of a third duel between Pacquiao and American Timothy Bradley, they remained standing, exploding into a collective roar of salute and appreciation as the ring announcer declared what they already knew in their hearts.

The boxing hero who was bidding them farewell had won his final battle.

Pacquiao rode on two knockdowns to a unanimous decision over Bradley, scoring 116-110 in the cards of all three judges to make his exit amid loud and emotional cheers from fans of the boxing dynamo who never failed to bring relentless action into the ring.

“I’d like to thank all the fans for all their support and all their love all these years,” Pacquiao said.

And almost as soon as the end of his career finally came, he was deluged by attempts to make him reconsider.

From the ring interview where they tried to bait him into picking a possible next opponent, to a press conference where trainer Freddie Roach talked about future opponents like Pacquiao hadn’t announced he was leaving the sport, to journalists constantly badgering him about the finality of his decision, to boxing rivals who said he was too good to call it quits, everyone pushed him to hedge on his retirement plans.

Pacquiao would not budge.

“Like I said, I already decided and committed to my family that after this fight, I’m going to spend more time with them and focus to serve the people in the Philippines,” he said. “That’s the priority of my focus right now.”

For a souvenir, he left them with a performance that was the closest that he had come in years to his form of old, when he terrorized multiple divisions to become the only fighter to win world titles in eight weight classes.

Starting off slow, Pacquiao picked up steam in the middle rounds, peaking in the seventh, when he scored what looked like a flash knockdown of Bradley. Pacquiao snuck in a right hook that didn’t connect as cleanly as it looked.

So after fending off trouble in the eighth, he did an encore in the ninth. This time, there was no doubt about the knockdown.

Pacquiao tagged Bradley with a left, baited the American into missing a jab, and then quickly countered with another left that had Bradley tumbling over backward.

“I’m happy with the result of the fight tonight, although every round I was looking for a knockout to finish the fight, but Bradley is also a tough fighter,” Pacquiao said.

“Every round, I was looking for a good shot, a knockout.”

It didn’t come, although he was probably close, judging from the fact that Bradley could not even remember being hit and knocked down.

“Honestly, man, I don’t even remember,” Bradley said, eliciting laughter from the crowd.

He was shown replays of the knockdowns and the memory came back slowly.

“That wasn’t a knockdown. I got pushed by his glove,” Bradley said of the first knockdown. 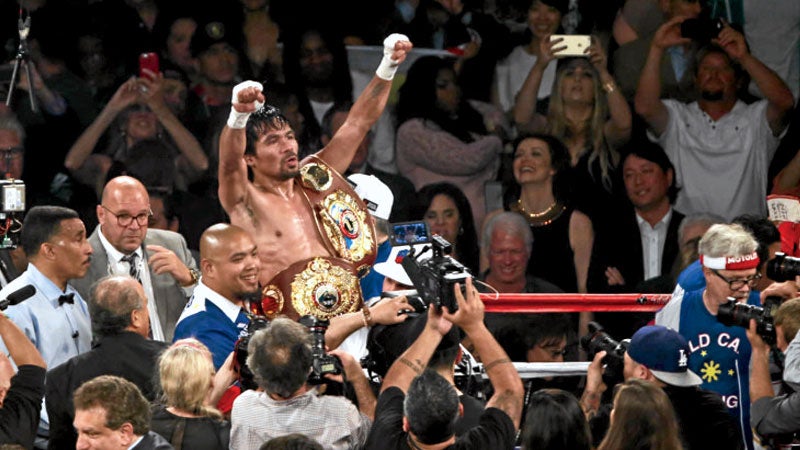 The second knockdown left him speechless.

‘The best I could’

“I fought the best I could tonight. I don’t know what more I could do,” Bradley said. “Manny was always in the right spot. He was looking to counter. He was smarter. He was a step ahead of me and I was supposed to be a step ahead of him.

“He was very patient. I felt like I wasn’t able to hit him. I wasn’t able to get to him. He was picking his spots, but he would get out quickly. When he made a mistake, he corrected really fast.”

Roach had seen this version of Pacquiao before.

“He looked like he was going for a KO because when he hurt Bradley, he went after him,” Roach said. “He was really good; that’s how Manny Pacquiao used to be and that’s why he’s such an exciting fighter.”

But Roach added he could have been better. “It wasn’t a complete comeback for Manny Pacquiao, but it was a good first step. But I liked what he did. He was aggressive, he went after his opponent and he did what he was supposed to do.”

End of the road

And now, Pacquiao hopes to do what he set out to do when he first signed for this fight: Quit at the end of it.

But Roach would be happier if he sticks on.

“It’s a difficult sport to quit,” he said. “It’s not easy to retire. He hasn’t realized it yet but he’s going to find out.”

Reporters tried several versions of the “are you sure you’re going to quit?” and “who are you going to fight next?” that at one point, Pacquiao pointed to the nth journalist with the nth question about his retirement and said: “You’re good!”

Bradley joined the chorus. He felt Pacquiao could still fight on: “Manny Pacquiao should not retire.”

Mexican rival Juan Manuel Marquez said he would definitely pay to watch Pacquiao take on a bigger and heavier Canelo Alvarez in a catchweight, the only possible in the horizon that he’d want to see.

But Pacquiao held firm. When finally he was asked about the possibility of coming back from retirement, he hardly changed his stance.

“Let me enjoy first a retired life,” said Pacquiao, who is running for a Senate seat in the May 9 national elections in the Philippines. “I might enjoy retired life. I’m not there yet so I don’t know what’s the feeling. And I’ve made my decision already.”