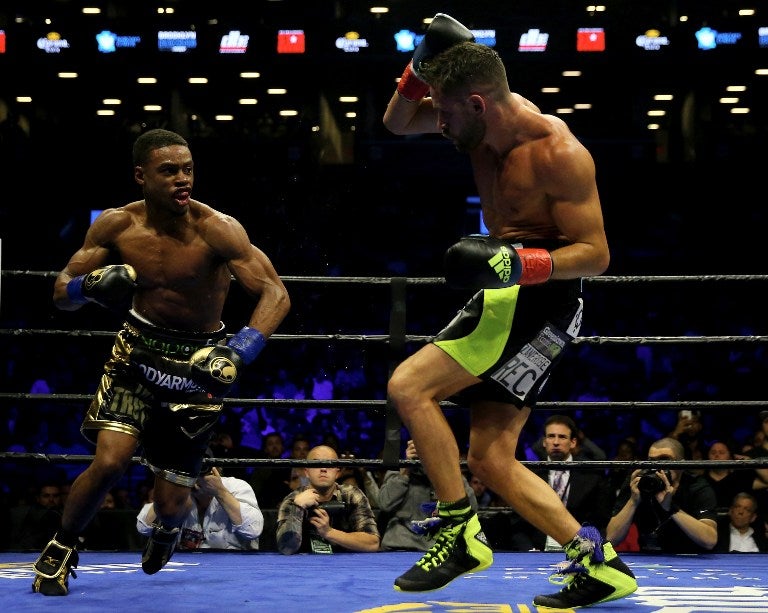 Errol Spence Jr. and Chris Algieri exchange punches during their welterwieght bout at Barclays Center on April 16, 2016 in the Brooklyn borough of New York City. AFP

NEW YORK—Errol Spence Jr. did something Manny Pacquiao and Amir Khan failed to do against Chris Algieri.

Spence capped a dominating performance by stopping Algieri with 48 seconds remaining in the fifth round in a welterweight fight Saturday night at Barclays Center in the main event of the Premier Boxing Champions card.

Spence (20-0) had his seventh straight knockout and 17th overall and did so against an opponent who went the distance against Pacquiao and Khan. Six of Spence’s last seven knockouts have been in the fifth round or earlier and a quick end seemed possible once the 26-year-old started using his quickness in the early rounds.

“It meant a lot to get the stoppage,” Spence said. “I did something Manny Pacquiao couldn’t do, nor Amir Khan. That shows where I’m at in the welterweight division. Everyone wanted to see what I could do against a proven fighter and I blew him out of the water.”

Facing his most established opponent, the former Olympian won a one-sided fight. He connected on 41 percent of his punches including 32 in the final two rounds.

“He brought some good stuff tonight,” Algieri said. “He stayed composed and that was a big part of it.”

Algieri withstood the some blows but the end approached in the fourth. Spence dropped him in the fourth with a short overhand left and knocked him down again early in the fifth.

“It was pretty one-sided,” Spence said.

The end came when Spence delivered a left hook to Algeri’s face. The hard shot sent Algieri spiraling to the canvas and referee Benjy Esteves didn’t hesitate to stop the fight.

For Algieri (21-3) it was his third loss in four fights since winning a split decision from Ruslan Provodikov for the WBO junior welterweight championship on June 14, 2013, in Brooklyn. He withstood getting knocked down six times by Pacquiao and went the distance against Khan but facing Spence, Algieri had few answers.

In the first fight, Poland’s Krzysztof Glowacki (26-0) retained his WBO cruiserweight championship by outslugging Steve Cunnigham (28-8-1) and getting a unanimous decision in his first title defense. Glowacki dropped Cunningham twice in the opening minute of the second round and in the 10th and 12th rounds to win the fight by scores of 116-108, 115-109 and 115-109.

“The plan from the beginning was to hit him with the left hand and you could tell I was hitting with full power,” said Glowacki, who landed 25.3 percent of his punches.