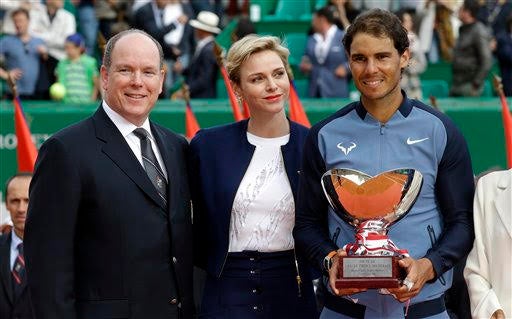 Rafael Nadal, right, holds his cup next to Prince Albert II of Monaco and his wife Princess Charlene, after defeating France’s Gael Monfils, in their final match of the Monte Carlo Tennis Masters tournament. AP

Normally, having to face 47 break points in five matches to win a tournament on clay would be a big cause for concern for the nine-time French Open champion. But the Spaniard sees it as a sign that his famed fighting qualities are coming back, compared to last year, when he was more prey than predator on clay.

“This week I was able to increase my level when things became tough, like I did before,” Nadal said. “That’s something I missed a lot.”

In total, Nadal dropped serve 13 times this week, and more clinical opponents might have made him pay.

The relief was evident for a profligate Nadal, as he overcame five breaks on his serve to win in Monte Carlo for the first time since the last of his eight straight titles in 2012. It also gave him a record-equaling 28th Masters title, bringing him alongside top-ranked Novak Djokovic.

He sank to his knees after sealing victory with a brilliant forehand winner, tilting his head back, closing his eyes to savor his biggest tournament win since the French Open in June, 2014 and his first at a Masters event since Madrid a few weeks before that.

“It has been a very important week,” Nadal said. “The victory confirms that I am better.”

Nadal is not going to get carried away. He has his sights set on a ninth title in Barcelona, having not won there since 2013, which is when he last reached the final.

“We will see how things are in the next six months (but) I have to enjoy this moment,” Nadal said. “Tomorrow I will start to think about Barcelona.”

This was his first title of the year, having won only three in 2015 — when he was riddled with self-doubt.

Last year, Djokovic battered him in the French Open quarterfinals; Stan Wawrinka beat him in the Rome Masters quarterfinals in straight sets; Andy Murray routed him in the Madrid final 6-3, 6-2; Djokovic won 6-3, 6-3 in the Monte Carlo semifinals; and even erratic Italian Fabio Fognini beat him twice — in Rio and Barcelona.

“Last year was a tough year,” the fifth-ranked Nadal said. “The nerves that I had, I was anxious in the matches.”

It took him 2 hours, 46 minutes to finally see off Monfils, who had never won a set against Nadal on clay and had lost 11 of their 13 previous matches.

“He increased his intensity and changed the way he was playing,” the 13th-seeded Monfils said, referring to the third set. “I simply couldn’t find an answer.”

Ina topsy-turvy encounter in which they conceded 34 break-point chances between them, Monfils dropped his serve eight times as Nadal clinched his 68th title in his 100th final, and his first since winning on clay at Hamburg last August. His previous final was in January — routed by Djokovic in Doha.

In a contest between two 29-year-olds with differing career trajectories, Monfils was rank outsider.

Since they first played each other in the second round here 11 years ago, Nadal has won 14 Grand Slams and Monfils has never even won a Masters title.

In their previous four contests on clay, Monfils had never taken more than three games off Nadal in a set.

At times it seemed Monfils could cause a big upset, hitting superb winners from incredible angles and with brutal strength.

“Gael’s potential is so high because he has everything to play at the highest level,” Nadal said. “Good serve, movements are unbelievable, super quick.”

But instead it was a 19th defeat in 24 finals and a third in a Masters final, having lost twice in Paris. He will regret 51 unforced errors, considering Nadal made 36 and double-faulted four times. But Monfils double-faulted seven times.

With six weeks to go until the French Open in Paris, Nadal will need to serve much better.

He missed a chance to serve out the first set at 5-3 up, double-faulting. After saving four sets points, Monfils double faulted to give Nadal the opener.

With great athleticism, Monfils hit an incredible leaping forehand down the line to force another chance on Nadal’s serve.

After holding, Nadal broke Monfils to love in the next game to level at 3-3.

But Monfils broke him again with a brilliant forehand winner down the line for 4-3, only for Nadal to break back.

It was breathlessly entertaining for fans and frustrating for both players.

By now, sweat was pouring off Nadal’s face; but Monfils was even more drained and he crumbled in a third set lasting 30 minutes.