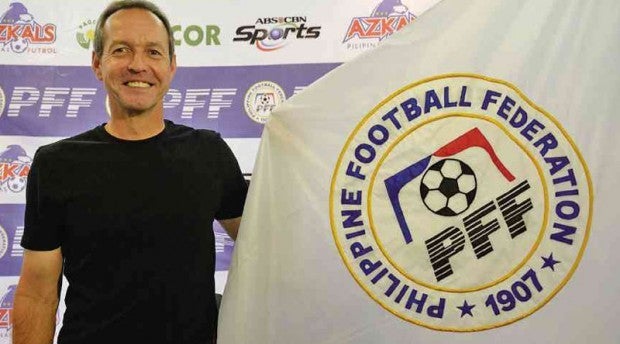 THOMAS Dooley has agreed in principle to a two-year deal to stay on as coach of the Philippine Azkals, who will be gunning for a first AFF Suzuki Cup title when the country hosts the tournament in November.

Dooley, who watched the United Football League Cup finals won by Global FC at the expense of Ceres-La Salle at Rizal Memorial Stadium last Saturday, said his contract extension will be finalized by the Philippine Football Federation this week.

“We’ve had initial discussions and I’m staying for two more years,” said Dooley, who steered the Azkals to the biggest upset in history last month when they stunned North Korea, 3-2.

“I always said that I wanted to stay so that’s why it was easy to come together and talk.”

Dooley earned raves for steering the Azkals to impressive matches, particularly against stronger sides like Uzbekistan and Bahrain in the World Cup Qualifying.

The Azkals also reached their highest ranking of No. 114 this month, regaining the top ranking among Southeast Asian countries.
But the Philippine team also suffered some stinging setbacks under his reign, including the home loss to Yemen and in the 2014 AFC Challenge Cup final against Palestine in the Maldives.

Dooley said the Azkals are slated to play Syria, China and Kyrgyzstan during the international window this year, before they plunge into action in the AFF Suzuki Cup, which the country is hosting for the first time.

The coach said that they are targeting a first finals appearance in the Suzuki Cup, after three straight semifinal finishes, on top of qualification for the 2017 AFC Asian Cup.