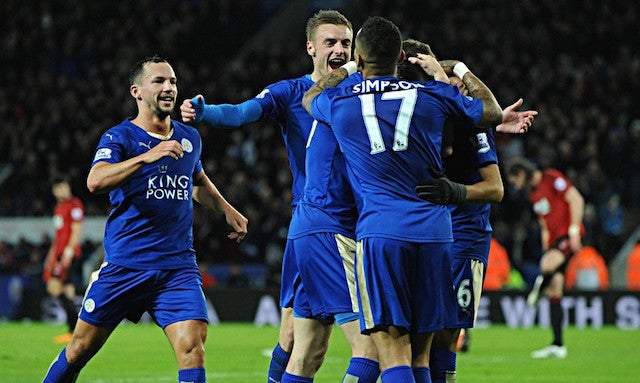 MANCHESTER, England — One chance gone for Leicester in its attempt to clinch a first English league title.

Over to you, Tottenham.

Needing three points to pull off the ultimate underdog success story in sports, Leicester only managed to pick up one from a 1-1 draw at Manchester United in the Premier League on Sunday.

Leicester still has two games left — against Everton at home next weekend and Chelsea away on the final day — to collect the required two points. It might not even go that far, as second-place Spurs has to beat Chelsea on Monday to keep the title race alive.

“I’d like to watch the (Chelsea-Spurs) match,” said Claudio Ranieri, Leicester’s Italian manager, “but I’m on a flight back from Italy so I might not know the result until I land.”

Spurs can at least prepare for that game at Stamford Bridge knowing they are guaranteed a top-four place and therefore a spot in next season’s Champions League.

The same can’t be said for either of the Manchester clubs.

While United stayed in fifth place, Man City dropped to fourth by losing 4-2 at Southampton as manager Manuel Pellegrini’s risk in playing a weakened team backfired.

Key players like Sergio Aguero, Kevin de Bruyne and Vincent Kompany were among those rested ahead of the second leg of the Champions League semifinal against Real Madrid on Wednesday, and it showed in City’s loose display at St. Mary’s Stadium. Sadio Mane scored a hat trick for seventh-place Southampton, while Kelechi Iheanacho scored both of City’s goals.

In the tight race for the final two Champions League spots, Arsenal is third — three points ahead of City and seven points ahead of United which has a game in hand. West Ham is a point further back in sixth.

In the other game Sunday, Swansea guaranteed Premier League football for another season by beating Liverpool 3-1, with Andre Ayew scoring two of the goals.

Like City, Liverpool seemed preoccupied by a looming European game — Thursday’s second leg of its Europa League semifinal against Villarreal, which stands at 1-0 to the Spanish side — and fielded a depleted starting lineup.

Christian Benteke scored the only goal for Liverpool, which finished with 10 men following the 76th-minute red card to left back Brad Smith.

For Leicester, a seemingly impossible dream is one step closer and there’s now a good chance the team could seal the title in front of its own fans at the King Power Stadium next weekend against Everton, in the next-to-last round of fixtures.

Danny Drinkwater, Leicester’s box-to-box midfielder will miss that game after being sent off against United for collecting a second yellow card in the 86th minute.

United opened the scoring at Old Trafford through Anthony Martial’s powerful sidefoot volley in the eighth minute, by which time Leicester had barely got out of its own half.

Ranieri’s team of rejects, journeymen and unheralded foreign players has been confounding the doubters all season and they did so again here, digging deep and equalizing with their first genuine chance when Wes Morgan headed in from Drinkwater’s free kick in the 17th.

“I am very pleased with our performance after the goal,” Ranieri said. “We keep calm and score a goal. After that we get a lot of confidence and play better. After that, it was another match.”

United could also have finished with 10 men had the referee spotted Marouane Fellaini lashing out at Leicester defender Robert Huth, first with his forearm and then with his elbow, as they jostled at a set piece. Fellaini appeared to be reacting after his hair was pulled by Huth and United manager Louis van Gaal empathized with his player.

Mimicking the incident by appearing to grab a TV reporter’s hair off camera, Van Gaal said: “What is your reaction when I grab your hair? Your hair is shorter than Fellaini’s but when I do that, what are you doing then? It’s a reaction.”

Leicester’s vocal fans stayed behind after the final whistle, chanting “Tottenham Hotspur, we’re waiting for you,” and “Are you watching, Tottenham?”

The pressure now moves onto Spurs, who haven’t won away to Chelsea in the league since 1990.