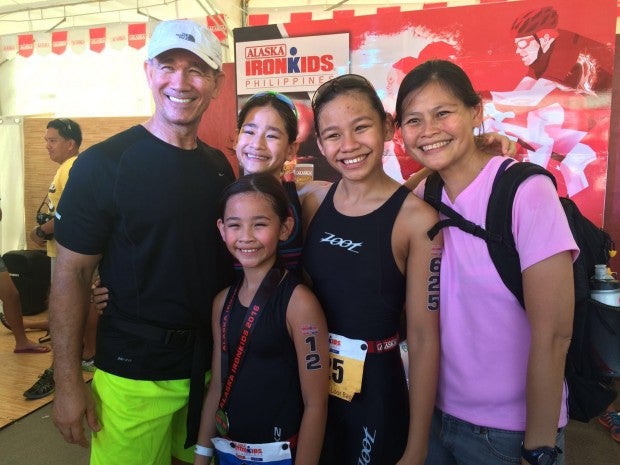 SUBIC—Tara and Samantha Borlain have lost track of their exploits in the Alaska IronKids over the years.

Now stronger and faster, both siblings again ruled their age bracket in the country’s biggest aquathlon race for children Saturday at the Remy Field here.

The 13-year-old Tara conquered the 400-meter swim and three-kilometer run in 19 minutes and 45 seconds while Sam, 14, placed second in the girls’ 13-14 category, just seven seconds off her younger sister.

“We just try to improve our clockings each time we race,’’ said Tara, who won majority of her races since bursting out of the limelight for winning the 2012 contest for girls’ 9-10 years old.

Just like the Borlain sisters, Juan Francisco Baniqued was a dominant figure in his age group, romping off with the title for the sixth time since the 13-year-old from San Pedro, Laguna swept all Ironkids races in both triathlon and aquathlon last year.

“It was a close race, but I somehow managed to speed ahead in the final stretch of the run,’’ said Baniqued, an incoming Grade 8 student at the Colegio De San Agustin in Binan, Laguna.

“I was confident right from the start despite only training for four days,’’ said the 5-foot-6 Quiambao, a swimmer who flourishes in backstroke events.

For reaching the podium, these winners qualified outright to the Alaska Ironkids triathlon in Lapu-Lapu City on Aug. 6, which will coincide with the Cobra Ironman 70.3 Asia-Pacific championships.

“This is part of our preparations for Cebu. It’s going to be a big race,’’ said Sam Borlain, whose father Ringo Borlain, a former bodybuilder, taught them the fundamentals of the sport.