FILE – In this Feb. 18, 1964, file photo, boxer Muhammad Ali, or Cassius Clay at the time, beats his chest in triumph after toppling Britain’s Beatles at his training camp in Miam i Beach, Florida. The Beatles, left to right: Paul McCartney; John Lennon; George Harrison and Ringo Starr, were on Holiday in the resort after their American tour. AP Photo/File

IT’S HARD to imagine now: barely having a clue who the Beatles were, or the man who would become Muhammad Ali.

But that’s how things were when Robert Lipsyte found himself face-to-face with these future legends more than 50 years ago, through a chance of publicity matchmaking.

The New York Times had plucked Lipsyte from the feature department to go to Miami Beach and cover the heavyweight boxing title fight between champ Sonny Liston and the upstart Cassius Clay, who would later change his name to Ali. He barely knew who Clay was, and even less about the mop-haired singers who happened to show up during his visit.

“I wasn’t a teenage girl,” Lipsyte said. “I really didn’t know who the Beatles were or what they would become.”

A few days earlier they had appeared for the first time on television’s popular Ed Sullivan Show. Now they were being led up a stairway in the gym where Clay trained, with an unwitting Lipsyte swept along.

“They’re little guys with lots of hair and all wearing white terrycloth cabana jackets,” Lipsyte said. “They were yelling and cursing because they had just been told Clay wasn’t there yet, and they wanted to leave. But these big security types just kind of herded them up the stairs.” FILE – In this Feb. 18, 1964, file photo, the Beatles, from left, Ringo Starr, John Lennon, George Harrison, and Paul McCartney spar up to Muhammad Ali, or Cassius Clay at the time, while visiting the heavyweight contender at his training camp in Miami Beach, Florida. AP Photo/File

Lipsyte found himself in a dressing room with the Beatles, who weren’t at all happy. They had gone earlier to Liston’s training, but Liston took one look at them and refused to pose for pictures.

Lipsyte introduced himself and asked for their prediction, which was for a first-round Liston knockout. Then they all waited for 10 or 15 minutes, with the Beatles complaining the whole time, for Clay to arrive.

“But suddenly the door burst open and there he is. He’s the most gorgeous creature I’ve ever seen. He kind of glows and he’s laughing, and he says, ‘Come on, Beatles, let’s go make some money.'” 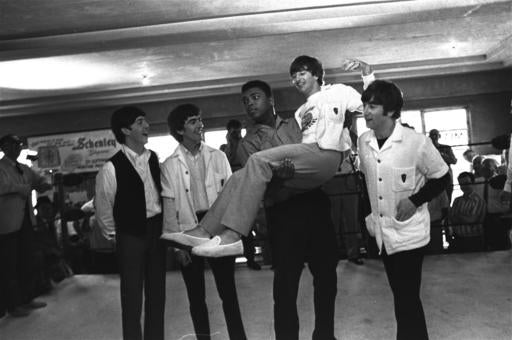 FILE – In this Feb. 18, 1964, file photo, boxer Cassius Clay (Muhammad Ali) lifts Ringo Starr, one of the Beatles, into the air while the singers visited Clay’s camp in Miami Beach, Florida. AP Photo/File

Make some money they did. In photos that would become legendary, Clay is shown knocking the Beatles down like dominoes, and standing over them sprawled out in the ring.

It was as if they had all rehearsed it beforehand, Lipsyte said.

“There was a lot of laughter, and then they’re gone, off to their limo,” he said. “Cassius then started training in front of people who paid 50 cents to get in.”

After the workout, Clay went back to the dressing room for a rubdown, and Lipsyte crowded in with him. Clay recognized him as being in the room earlier, and beckoned him over with a question. “Who were those little sissies?” he asked.

Clay, of course, would beat Liston and go on to even greater things as Muhammad Ali. Lipsyte would become a columnist for the Times and cover him for years.

And the Beatles? They ended up doing OK, too.