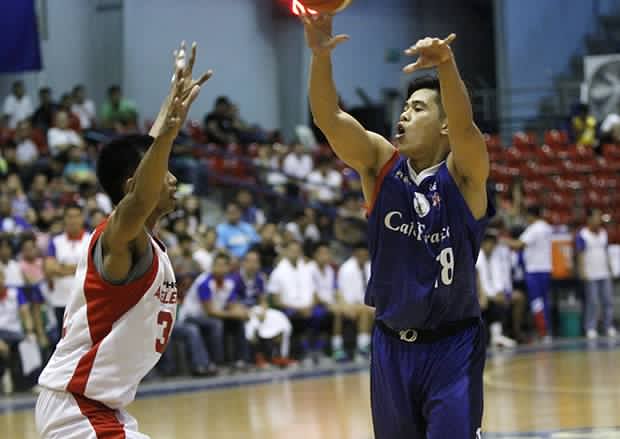 The Finals rematch lived up to the hype, and at the forefront of it all is Carl Bryan Cruz.

Facing off against his former comrades in Far Eastern U, Cruz lifted Cafe France in overtime, 96-93, over Phoenix Thursday in the 2016 PBA D-League Foundation Cup at Ynares Sports Arena in Pasig.

Cruz scored nine of his 15 points in extra time to help the Bakers rise to the top spot, scoring its fourth straight win to improve their standing with a 7-2 card.

Cruz was poised to seal the deal after his baseline drive made it 92-85 with 1:06 left, but Mike Tolomia and Roger Pogoy nailed huge threes in the end to get Phoenix within one, 94-93, with 8.5 ticks remaining.

Fortunately, Paul Zamar was cool from the stripe as he nailed a pair of freebies with 5.1 seconds left to push Cafe France up, 96-93, before Tolomia missed his game-tying three against two defenders at the buzzer.

Phoenix fell to a tie for second place with Racal at 7-2.

Pogoy topped the Accelerators with 26 points on a 5-of-10 shooting from three along with 10 rebounds, while Tolomia netted 16 markers, seven boards, and six assists.

Ed Daquioag also finished with 16 points and five rebounds in the defeat.

Phoenix played without Mac Belo, who sat the game out due to a sprained ankle.

The Accelerators had to battle back from a 75-68 deficit with 3:26 left and forced overtime after Tolomia canned all of his three freebies to tie the game at 79 with 3.5 seconds remaining. Zamar still got a shot at the halfcourt, but his hail mary bounced out at the end of regulation.