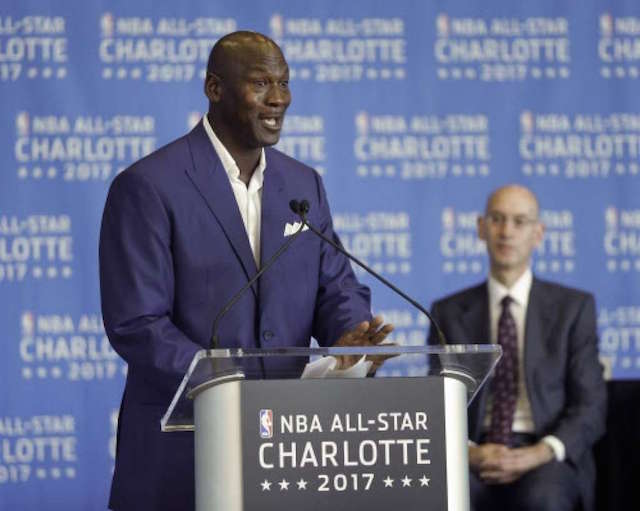 RALEIGH, N.C. — The NBA All-Star Game’s exit from North Carolina because of a law limiting protections for LGBT people represents some of the worst publicity yet for Republican Gov. Pat McCrory’s re-election campaign, even as he dismisses the move as political correctness gone too far.

The 2017 event’s departure from Charlotte deprives the state of an estimated $100 million economic impact and comes after the law prompted PayPal and Deutsche Bank to cancel plans to add hundreds of jobs. The law known best for its restrictions on transgender bathroom access looms large in an election season that includes one of the nation’s most closely watched governor’s races.

Shortly after the NBA’s announcement Thursday night, the governor who promotes himself as pro-business issued a statement lashing out at the sports and entertainment industries, the “liberal media” and his opponent in the fall race, the state’s Democratic Attorney General Roy Cooper.

Cooper has refused to defend the law in court, while McCrory filed a federal lawsuit seeking to uphold it.

The law enacted in March requires transgender people to use restrooms corresponding to the sex on their birth certificates in many public buildings. It also excludes sexual orientation and gender identity from statewide antidiscrimination protections.

Republicans including McCrory are likely to maintain their rhetoric surrounding the law known as HB2, banking on conservative voters in rural areas who support the law, said Michael Bitzer, a political science professor at Catawba College.

“If you are seen as compromising or trying to find some way out of this, you will simply get hammered by your core base supporters,” he said.

Still, Bitzer said that if more events pull out of the state, it will be hard for voters to ignore the law’s impact. The NCAA, which has 2017 basketball tournament games scheduled in Greensboro, issued a policy shortly after the North Carolina law passed requiring host sites to demonstrate that they are “free of discrimination.”

“When it comes to these kinds of events, maybe future NCAA basketball tournaments, I just have to wonder when that breaking point is over one’s partisanship,” Bitzer said.

Local tourism officials estimated that the NBA All-Star Game’s economic impact would likely have ranked second in Charlotte’s history behind the $164 million brought in by the 2012 Democratic National Convention. The annual exhibition basketball game showcasing the league’s stars draws visitors from around the country and is held in a different city each year.

Cancellations of special events booked at the group’s Slate Billiards and Oak Room for the week of the All-Star Game are expected to deprive the company of an estimated $300,000 in sales, Conroy said. Conroy compared that amount to the $20,000 to $100,000 in sales at the company’s venues on the day of a home NFL game.

Around the state, entertainers including Bruce Springsteen have canceled concerts to protest the law, while 68 businesses signed an amicus brief urging a federal judge to block the provision on bathroom access.

Lawyers for the companies — including General Electric Co., Microsoft Corp. and United Airlines Inc. — wrote that the law “is already damaging their ability to recruit and retain a diverse workforce and is imposing a substantial disincentive to investment and commerce in the State, directly impacting their bottom line.”

Cooper’s campaign was quick to criticize McCrory over the NBA’s move, issuing a statement saying: “While the economic consequences of HB2 grow, Governor McCrory continues to pass the blame onto others while refusing to take any action to stop the bleeding.”

State Sen. Jeff Jackson, a Democrat whose district includes part of Charlotte, put the blame for the NBA’s move squarely on McCrory, saying the governor is “so closely tied to the issue.”

“There is a very good chance the All-Star Game just cost him the election,” he said.

However, Republican strategist Dee Stewart said polling data suggests McCrory’s position on the LGBT law won’t hurt him because other issues are more important to voters.

“With so many issues on voters’ minds today like national security, our economic recovery and the need to take care of our vets … I don’t believe that HB2 will sway many votes either way,” said Stewart, who is not involved with McCrory’s campaign.