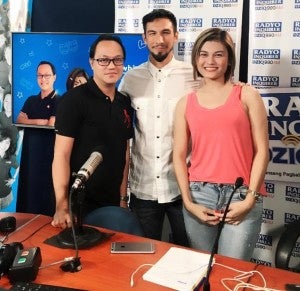 Another hot footballer has guested on Inquirer ShowbizLIVE (a week after Graham Caygill visited) and recounted how he met and tediously captured the heart of his ladylove.

Like many members of the Philippine national football team Azkals, Anton del Rosario is of mixed parentage, a half- American who grew up in the US, particularly in the San Francisco Bay Area. He came to the Philippines for a vacation and that’s where it all started.

Blessed with good looks and athletic talent, he’s had his own share of fairy-tale ending as he just won the heart of one of the members of the Brunei Royal family, the daughter of Prince Jefri Bolkiah of Brunei Darussalam, Samantha Richelle Bolkiah.

Del Rosario recounted how his love story began with his then girlfriend and now fiancée and mother of his kid.

“It started pretty funny. We were both on vacation from the States coz she used to live in L.A. I saw her in a bar, Fiama, back then. I’m sure a lot of people know what that place was, along Jupiter [Street, Makati City]; that night I wasn’t even supposed to go out. [There were] not too many people out, I opened the door and she was the first one I saw,” Anton said as he recalled how it was an instant love at first sight.

But despite being endowed with a hot physique and the aura of a rising sports celebrity, he did not capture the heart of the half-Bruneian instantly. It took a long time before she got to see that “he isn’t so bad after all.”

“I kept on pushing for her but she kept on tossing me away and this went on for about a year and a half. And then things worked out, she finally found me attractive. I was very persistent,” Del Rosario told the Inquirer Group’s first online weekly talk show on Wednesday, July 27 .