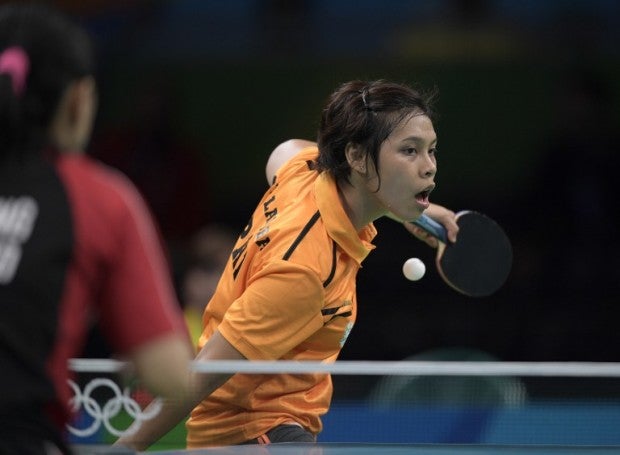 RIO DE JANEIRO—Faced with the biggest match of her life in her sport’s most important stage, Ian Lariba thought she could handle the pressure.

Her mind did; her body could not.

“I could feel some tension in my shots, like I was pulling them back a bit especially during the crucial stretches,” said the 21-year-old four-time UAAP Most Valuable Player in Filipino.

She fought Han tooth and nail right up to the late points of all four sets but was no match to the finishing poise of the Congo-born daughter of Chinese parents from Brazaville.

The defeat eliminated Lariba from the competition, where she was ranked second from the bottom at the start of the tournament, being the world’s No. 200.

“I managed to get the scores close in each set, but somehow I was unable to follow through,” she lamented, tears welling in her eyes.

Han reaped the dividends of her four-month pre-Olympic training in the land of her parents’ birth where she practiced with top Chinese players.

She won crucial points off on-the-table smashes and clearly was the more experienced player.

But Lariba surprised Han with an unorthodox defense and dragged each set to its decisive conclusion before yielding.

“I will bring this experience home with me,” said Lariba, originally from Cagayan de Oro who qualified here through the Asian Olympic qualification in Hong Kong several months ago.

Chief of mission Joey Romasanta watched the match, the first involving a Filipino athlete in this Olympics, at Riocentro-Pavilion 3, and could only shake his head at the result.

“Ian showed her fighting heart but in this kind of competition you also need a bit of luck in the crucial points,” he said. “Obviously, the Congolese had everything going for her.”

Read Next
GALLERY: Youngsters celebrate victory at finish line of Alaska IronKids
EDITORS' PICK
Is it safe to talk politics again at family gatherings? ‘The Reconciliation Dinner’ shows us what that’s like
House energy committee chair Arroyo bats for cheap electricity
EDITORIAL: To a bike-friendly future
vivo’s coming to town to grant wishes with more holiday promos
The Best Tech Gifts For The 2022 Holidays
Pagasa: Warm, sunny Sunday in most parts of PH
MOST READ
LOOK: Vhong Navarro transferred to BJMP detention facility in Taguig
The Elephant Man in the Senate
Posh village as ‘shabu’ haven
LOOK: Zanjoe Marudo bonds with Ria Atayde, her family
Don't miss out on the latest news and information.