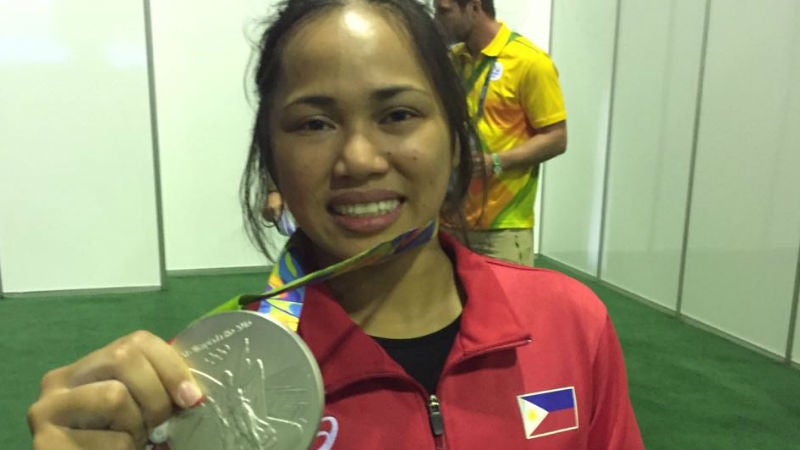 RIO DE JANEIRO — Hidilyn Diaz ended the country’s 20-year dry spell in the Olympics by snaring the silver medal in the 53-kilogram class of the weightlifting competition at the Riocentro Pavilion 2 here.

Diaz and the handful of Filipinos in the gallery were already celebrating her third-best, bronze-clinching total of 200 kg when China’s erstwhile frontrunner Li Yajun failed in her third and final attempt to lift 126 kg in the clean and jerk and scratched out of the contest.

Li, who actually tied the Olympic record in the snatch, failed in all three tries at 126.

Realizing that Li had bungled it, the three-time Olympian Diaz jumped in joy and raised her arms in triumph.

The country’s first medalist in weightlifting then sought out her coach and top delegation officials.

It did not really matter that Diaz’s total lift was 12 kg lighter than that of the 212 of gold medalist Hsu Shu-ching of Chinese Taipei.

South Korea’s Yoon Jin-hee snared the bronze with a total lift of 199 kg.

The silver medal means a cash windfall for Diaz under the government’s incentive program for medalists in the Olympics. Delegation officials said she stood to pocket at least P5 milllion in bonuses.

Nestor Colonia failed all his three attempts at 154 kg in the clean and jerk and, like the Chinese who yielded a sure gold in Diaz’s weight class, scratched out of the competition won by China’s Long Qingquan in a new Olympic record of 307 kg.

Colonia placed 6th in snatch with a 120 kg lift. SFM