Fans fight in stands during tennis match in Rio 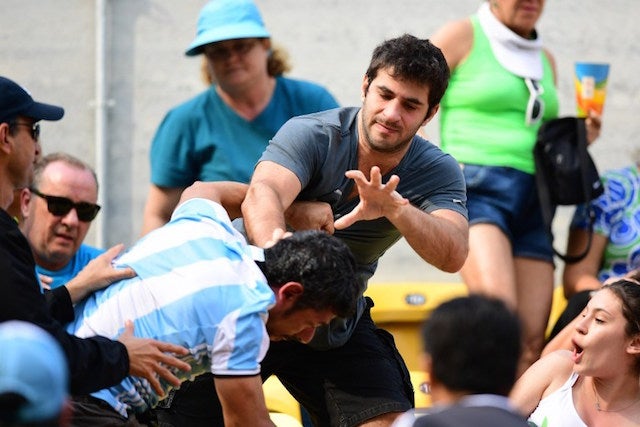 An Argentina fan fights with another fan during the men’s second round singles tennis match between Argentina’s Juan Martin Del Potro and Portugal’s Joao Sousa at the Olympic Tennis Centre of the Rio 2016 Olympic Games in Rio de Janeiro on August 8, 2016. AFP PHOTO / Martin BERNETTI

Juan Martin del Potro blasted fans who engaged in an Olympics punch-up as tensions between Brazil and Argentina followers boiled over on Monday.

The giant Argentine followed up his shock first round defeat of Novak Djokovic by downing Portugal’s Joao Sousa 6-3, 1-6, 6-3 to move into the last-16.

But traditional bitterness between the South American rivals erupted in an ugly altercation at the start of Monday’s centre court match.

Del Potro was widely booed and jeered when he came on the court Monday as well as during his win over world number one Djokovic the previous night.

“The crowd always makes a special atmosphere. It was beautiful apart from the incident in the beginning,” said the 27-year-old del Potro.

“I hope that will not happen again because people need to enjoy the matches and we need to have peace between Argentina and Brazil. This is not football.

“After that there was a lot of respect so we could enjoy.”

Argentine fans certainly made themselves heard on Sunday and Monday.

Wearing sky blue football shirts and draping national flags and banners over the walls and barriers, they chanted del Potro‘s name at every opportunity.

Del Potro, the 2009 US Open champion, said he was running on emotion by the end of his match with Sousa.

“Last night I went to bed at 4:30 in the morning. Today I was having breakfast at nine o’clock,” said the Argentine whose build-up to his match with Djokovic on Sunday had been marked by him getting stranded in an elevator for 40 minutes.

“I still can’t believe I beat Djokovic and had to play again so soon. And I can’t believe I’ll have to play doubles later today. It is very hard, but we’ll do what we can.”

Del Potro is acutely aware that his frail wrists, which have required three operations, may eventually torpedo his medal aspirations.

“I am getting better and I am in good shape but I don’t know if I am prepared to play six or more matches this week,” he said.

Del Potro has a heavy schedule in Rio.

He is also playing men’s doubles with Maximo Gonzalez.

Del Potro, who missed most of the 2014 and 2015 seasons through injury, is right to be cautious.

After stunning Stan Wawrinka at Wimbledon this year, he suffered a huge letdown in the following round in a weary loss to Lucas Pouille of France.

“I am going slowly, I am trying to get better every day and I think I am doing well,” added del Potro, a bronze medallist at the London Games in 2012.

Standing in the way of a quarter-final place is New York-born Japanese player Taro Daniel, the world number 118.

Daniel knocked out US 14th seed Jack Sock in the first round and accounted for Britain’s Kyle Edmund on Monday.

“It will be a tough match for me but if I can still hit my forehand hard and serve well then maybe I can win.”