MANILA — Not only did Hidilyn Diaz embark on a medal quest in Rio, her experience on the road to victory was a spiritual journey.

Almost quitting weightlifting in 2014, the 25-year-old Diaz said that throughout her participation in the Summer Olympics she was in prayer to the point that she did not immediately realize that she had won the silver instead of a bronze medal.  Diaz recalled how she was able to regain the inspiration for the sport after she suffered a slump and failed to qualify for the Southeast Asian Games in 2014.

“It’s good she decided to stay in the sport,” remarked her coach, Alfonsito Aldanete, who masterminded Diaz’s return to form in 14 months.

Diaz arrived at the Ninoy Aquino International Airport Terminal 3 on Thursday around 6 p.m. on an Emirates flight and was mobbed by admirers and well-wishers, including her superiors at the Philippine Air Force who had the service’s band in tow to give her a proper hero’s welcome.

Briguez told reporters that he has approved her promotion to the next rank from an A2C at the 710th Special Operations Wing.

Diaz was then embraced and kissed in greeting by her teary-eyed parents Eduardo and Emelita. The 25-year-old athlete suddenly took off the Olympic silver medal from around her neck and gave it to her mother.

During the press conference, Diaz explained that it was her mother’s birthday when she competed in the 53-kilogram weight division in the Rio Olympics.

Emelita, for her part, recalled that she was praying the rosary when she was told by neighbors that her daughter had clinched the bronze medal. She then went to the chapel at Barangay Mampang in Zamboanga City for thanksgiving. It was then that she was again told by her neighbors that Hidilyn had won a silver medal. 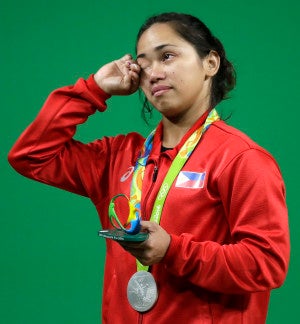 Hidilyn Diaz, of the Philipines, wipes away tears after winning the silver medal in the women’s 53kg weightlifting competition at the 2016 Summer Olympics in Rio de Janeiro, Brazil, Sunday, Aug. 7, 2016. (AP Photo/Mike Groll)

Asked how she prepared for the Olympics, Diaz said that it was mostly “spiritual preparation.” “I surrendered everything to God. I asked him to send the Holy Spirit so I can do what needs to be done. When God gave me the chance to compete in the Rio Olympics, I thought that He gave me the chance and I needed to give it my all,” Diaz said.

“I was surprised when I saw the Korean team rejoicing. It was the coach from Taiwan who told me, ‘You’re second.’ I was ecstatic,” Diaz recalled.

She said that she hopes she could return to her hometown on Sunday in time for the fiesta so she could pray to their town’s patron saint.

Diaz revealed that she would like to buy a lot across from their home with the P5 million incentive she was given and turn the property into a gym. “I want to build a gym for the children. I also want them to dream. I also want them to be Olympians, to be medalists,” she said.

Asked what she would ask President Duterte if she could, Diaz simply said, “Grassroots sports training,” and said that she had no plan of retiring from weightlifting anytime soon.

Her coach Alfonsito Aldanete said that Diaz almost quit the sport in 2014 after she failed to qualify in the Southeast Asian Games.

“She lost focus after she was not able to compete and her allowance from the Philippine Sports Commission was considerably reduced. Hidilyn wanted to just go to the US to work as a fitness instructor,” Aldanete pointed out, explaining that from a monthly allowance of P40,000, it was reduced to just P9,600.

He said that he convinced Diaz to stay on, “You’ve trained for 14 years. Now you’ll only be training for 14 months and you’ll get a medal.” Aldanete said that he promised to set Diaz free after Rio.

Aldanete said that he crafted a program for Diaz the target of which was 2016. “I said Diaz will be ready by 2016. There will be obstacles along the way but the best way is to bring down her weight,” he explained, adding that a nutritionist, a psychologist, and a conditioning coach had to be brought in to basically “rehabilitate” Diaz.

“It’s good she decided to stay in the sport,” he remarked.

He pointed out that Diaz came from four generations of weightlifters and the sport practically ran in the blood. (With a report from Janine Perea, trainee)  SFM