Rio turns into an Olympic-sized disappointment for Franklin

All are helping Missy Franklin cope with an Olympics gone wrong.

A huge star at the London Games four years ago, Franklin has been one of the biggest U.S. disappointments in Rio de Janeiro — an inexplicable fall she’s at a loss to explain.

“I really wish I could tell you,” Franklin said Thursday after another lackluster swim. “In my mind, I made the hardest sacrifices I’ve ever had to make this year. I’ve poured myself into this every single day for the whole year and the three years leading up to that. For whatever reason, it just not happening at this meet.”

As a high school senior-to-be, Franklin competed in a staggering seven events in 2012, winning four gold medals and a bronze. She became only the second American woman, after Amy Van Dyken, to capture four golds at a single Olympics.

But, following two years swimming collegiately at California and then turning pro last summer, Franklin hasn’t been able to recapture the form that made her one of the most-hyped — and heavily sponsored — U.S. athletes heading into the Rio Olympics.

She struggled at the U.S. trials, qualifying for the team in only two individual events, both with runner-up finishes.

In Rio, she failed to even qualify for the final of the 200-meter freestyle. After that showing, the coaches only picked her to swim the preliminary of the 4×200 free relay, a decision that would have seemed unfathomable just a few months ago but didn’t meet with any protest from Franklin.

“I was absolutely fine with it,” Franklin said. “They 100 percent made the right decision.”

The 21-year-old still earned a gold medal — the fifth of her career — when a Katie Ledecky-led squad swept to victory in the relay final Wednesday night.

That did little to ease the sting for Franklin. She’s ready to go home to Colorado. 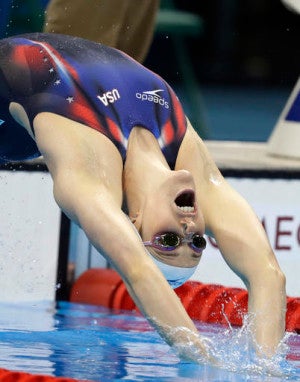 “Being totally honest, I’m doing better because it’s almost over,” she said.

Franklin has coped with her struggles by leaning heavily on her religious faith.

Her teammates are doing all they can to help.

“I just throw a couple of random dance parties. I take some really, really horrendous Snapchats of her,” Cierra Runge said. “Whatever I can do to make her laugh.”

Those Dove chocolate candies with the inspirational message on the wrapper help, too.

One of the verses really stuck with Franklin.

“Every day is an opportunity to change things for the better,” she recounted. “That was a good reminder that regardless of how things have been going, how I’ve been feeling, every day is a new opportunity.”

And, of course, she can always turn to her family.

“You’re never too old to call your mom and cry and ask her for advice,” Franklin said. “She just told me that it’s going to be OK, and that’s all I needed to hear. Yeah, it’s hard right now. It’s probably the hardest thing I’ve had to go through. But it’s going to be OK. I’m loved. I’m supported. When you put things in perspective, if a disappointing meet is the worst thing that happens in my life, then I have a pretty damn good life.”

Franklin was competing Thursday in her final event of the games, the 200 backstroke, an event she won at London. She gave little indication of turning things around in the preliminaries, managing only the 11th-best time at 2 minutes, 9.36 seconds.

That was good enough to get her to the evening semifinals, but nearly 2 seconds slower than she went during the prelims in 2012. Her gold medal time was 2:04.06, a level she has seems to have accepted won’t be attainable this time around.

Franklin will return to Cal in the fall to resume her studies, but she made clear that her swimming career isn’t over.

“It doesn’t mean I’m anywhere close to being done with this sport,” she said. “I’ve got so much left to give to this sport, to my fans, to the people who’ve been supporting me.”

If there’s a bright side, Franklin has learned just how much she’s really loved.