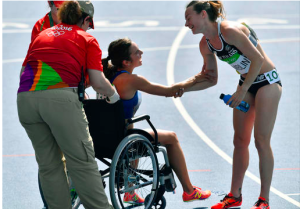 New Zealand’s Nikki Hamblin greets United States’ Abbey D’Agostino, left, as she is helped from the track after competing in a women’s 5000-meter heat during the athletics competitions of the 2016 Summer Olympics at the Olympic stadium in Rio de Janeiro, Brazil, Tuesday, Aug. 16, 2016. (AP Photo/Martin Meissner)

American runner Abbey D’Agostino’s selfless act during the 2016 Rio Olympics 500m run will forever be etched in the history books. Unfortunately for her, that act would lead to the end of her participation at Rio 2016, as she suffered a torn ACL and meniscus, as well as a strained MCL in the fall with New Zealand’s Nikki Hamblin.

After the New Zealander fell and accidentally took the American down with her, D’Agostino stood up and helped her counterpart back to her feet, encouraging her to finish the race.

The 24-year-old US representative, who was unaware of the extent of her injuries at the time, was still able to finish the final four laps of the race. However, the pain was too much for her and she was deemed unable to continue.

D’agostina is now out for the running for the event final, but despite that setback, she remains positive about the Olympic experience and her moral victory.

“By far the best part of my experience of the Olympics has been the community it creates, what the games symbolizes,” she was quoted as saying in The Telegraph report.

“Since the night of the opening ceremonies, I have been so touched by this–people from all corners of the globe, embracing their unique cultures, yet all uniting under one celebration of the human body, mind, and spirit,” she added.   Khristian Ibarrola