The joyous rhythms of samba singers set the atmosphere in front of a packed stadium, followed by a giant projection of Brazil’s Paralympic swimmer Daniel Dias, and a carnivalesque reproduction of a Rio beach scene.

But Brazil’s tensions also flared with thousands in the crowd chanting “Out with Temer!” as newly sworn in President Michel Temer appeared at the ceremony just days after taking over from bitter rival Dilma Rousseff, who was impeached.

Blind, missing limbs or partially paralyzed, the world’s toughest and most competitive disabled were parading ahead of 11 days of contests.

For Rio, the Paralympics, coming right after a vibrant but sometimes tricky Olympics, are one more challenge in a period of deep recession and political instability.

But all those worries were set aside for the sporting extravaganza.

“These are going to be the people’s Games. You can’t come to a more passionate people for sport,” International Paralympic Committee President Philip Craven said.

Noting that 4,342 athletes from 159 countries plus members of the international refugee team were taking part, he said: “All I saw were happy athletes in the Village.”

Craven said the Paralympics, which will be broadcast in 154 countries, had the power to change the way people around the world think about the disabled.

“That’s where transformation happens,” he said. 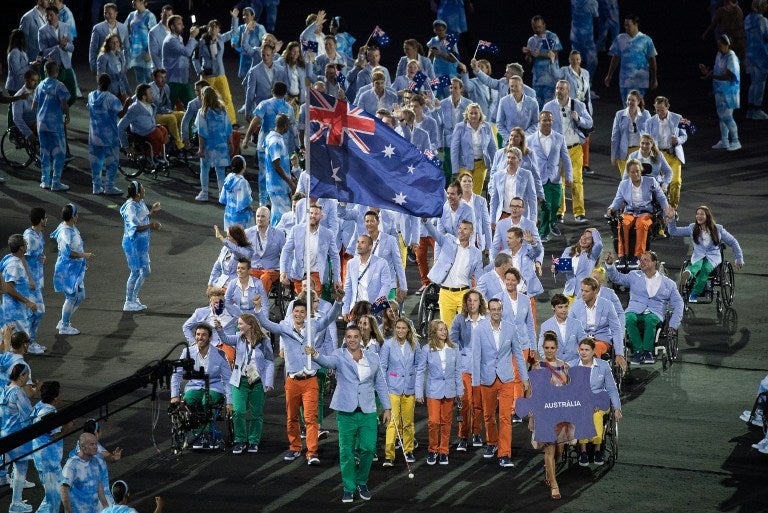 Australia’s Paralympic team is led by flagbearer Bradley Ness AUS, representing Australia in Wheelchair Basketball, as they enter Maracana Stadium during the Opening Ceremony of the Rio 2016 Paralympic Games at the Maracana Stadium in Rio de Janeiro, Brazil, on September 7, 2016. Photo by Simon Bruty/OIS/IOC via AFP. RESTRICTED TO EDITORIAL USE. / AFP PHOTO / OIS/IOC / Simon Bruty for OIS/IOC

However, controversy hung over the opening ceremony after confirmation that International Olympic Committee President Thomas Bach was not attending. This was the first absence of an IOC chief since the 1984 Summer Games.

Bach is due at a mourning ceremony in Berlin for the late West German president Walter Scheel.

However, there have been suggestions that the no-show has to do with divisions over the Paralympic committee’s outright ban on Russian athletes after allegations of a state-sanctioned doping program and the IOC’s relatively softer line.

There were also reports in Globo and other Brazilian media outlets that Bach is wanted for questioning by local police investigating an illegal ticket selling ring allegedly involving a senior Irish Olympic official.

Separately UK Athletics will review classifications after the Games, according to BBC News, following concerns that athletes were being mismatched to create an unfair advantage.

Caught in political and economic crises, Rio 2016 organizers have skimped as far as they can on food, transport and accommodation.

The run-up to the Games was also overshadowed by slow ticket sales. This follows concerns about half-empty stadiums at many of the Olympics events.

But organizers have reported a dramatic turnaround in the last few days.

Six countries are sending athletes for the very first time, and Syrian swimmer Ibrahim Al-Hussein, who lost a leg in an explosion in his nation’s civil war, and Iranian discus thrower Shahrad Nasajpour make up a two-strong refugee team.

The record of 41 career gold medals won by blind American swimmer Trischa Zorn between 1980 and 2004 looks unbeatable, but the Paralympics will inevitably produce new stars.

China will have its biggest ever team of 308 athletes in Rio looking to beat their 95 gold medals from London when they topped the table for the third straight Paralympics.

They have swimmer Xu Qing competing in his fourth and possibly last Games, seeking to add to his seven gold medals.