Broken ring ropes and other highlights of WWE Live Manila Performing in front of a packed crowd at Mall of Asia Arena, WWE Live Manila promised an unforgettable event, and boy, did the stars deliver one.

Professional wrestlers showcased their own brand of entertainment that kept the people standing, cheering, and wanting for more.

And INQUIRER was there, one with the crowd as the WWE captivated the Filipino audience for the first time in seven years.

But among the standout moments in that memorable night, we chose seven highlights which will surely be remembered by the ones in attendance, some of which even talked about in the interwebs. Cena, Show make their own ‘pops’

There’s really quite nothing like a John Cena entrance.

The 15-time world champion got the biggest pop of the night, with everyone standing up and making a noise for the leader of the Cenation. May it be “Let’s go, Cena!” or “Cena Sucks!,” everyone inside the arena had a reaction as Cena prepared for war.

But what stuck to the people who witnessed the event live didn’t come from Cena, but rather, his opponent Big Show. The 450-pound giant was about to hit a splash on Cena on the corner when the middle rope snapped in two!

The air got sucked out of the arena as everybody wondered what just happened.

Thanks to the fighters’ quick thinking, they had to cut their match short, with Cena evading a Knockout Punch and turning it to an Attitude Adjustment for the win. 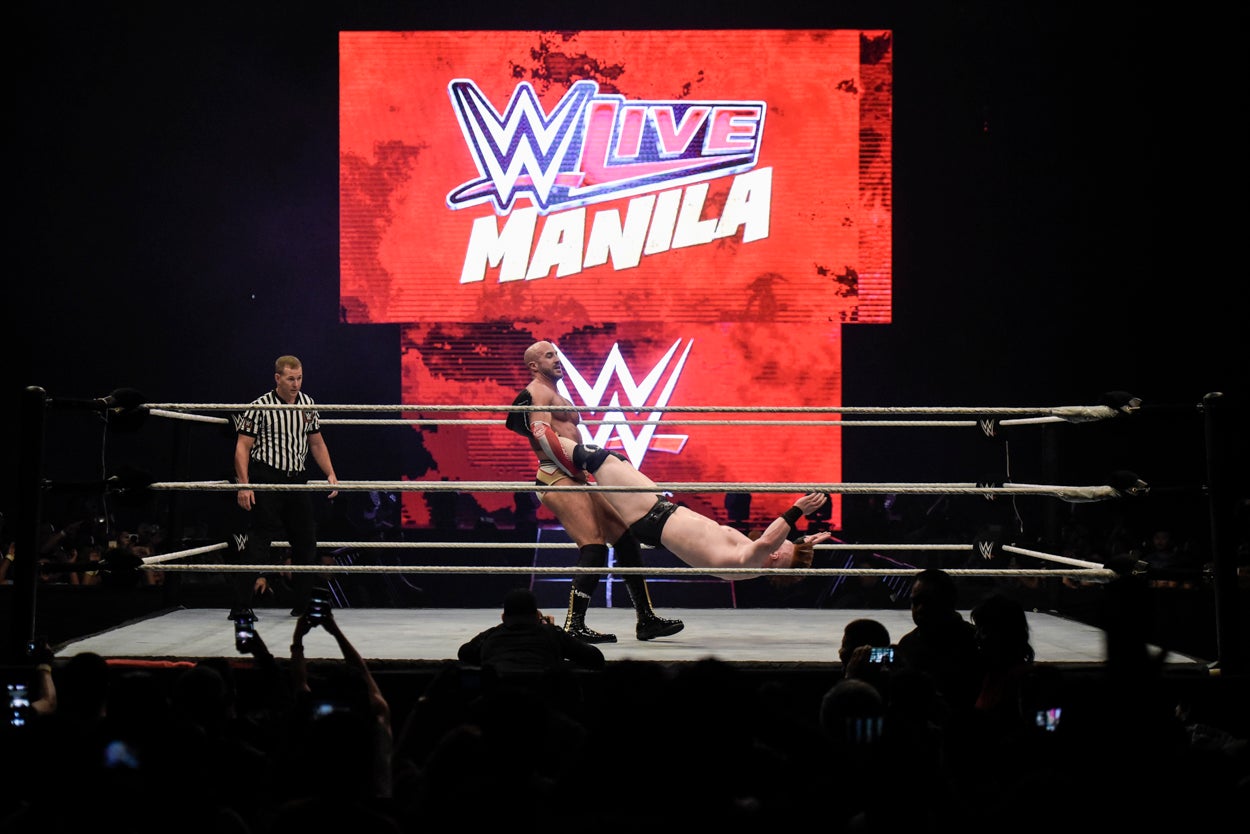 Bitter rivals in the ring, Cesaro and Sheamus opened the show in a hard-hitting affair to set the tone for the exciting night.

Though the duel wasn’t a part of their best-of-7 series, the two had no second thoughts in beating each other up.

Sheamus initially refused to get in to the action. The crowd, then, let him hear it, telling him, “You look stupid!,” before Cesaro forced him to fight.

The Swiss Superman fought hard despite nursing a lower back injury, something the Irish preyed upon for the entire match.

But that didn’t matter, as Cesaro reversed a Brogue Kick to a roll-up, swung Sheamus 10 times, before locking in the Sharp Shooter for the win. Don’t you just wonder sometimes how people do some things normal people can’t?

People might be thinking that way when they saw Neville go up in the turnbuckle and hit a Red Arrow on a prone Curtis Axel.

The English highflyer dropped everyone’s jaws as he showed his sleek offensive arsenal before setting up the gravity-defying corkscrew shooting star press.

It’s one thing to see it on TV, but to witness the move live, you could just agree that Neville truly is the man that gravity forgot. True to their word, The New Day brought in the fun and the shenanigans to the arena.

And they didn’t waste any time, dancing and prancing to the ring as they made their entrance. Big E even twerked in front of ring announcer Jojo as the crowd approved them with “New Day Rocks!” chants.

The Raw Tag Team Champions truly were an entertaining bunch, even as they fought The Shining Stars and Gallows and Anderson in a triple threat tag team match.

Though Xavier Woods took the brunt of the beating, it didn’t take long for them to regain control, with powerhouse Big E injecting life to their squad before setting up the Midnight Express to continue their reign as the longest tag team titlists in WWE history.

When the dust settled, there’s only one thing everybody in that arena knew: New Day rocks! She’s not the daughter of the “Nature Boy” Ric Flair for nothing.

Using the underhanded tactics her father rose to fame for, Charlotte used the rope for leverage as she scored the three-count off a rollup to beat Sasha Banks and retain her Raw Women’s Championship.

But Banks, who came in the ring with Superstar Walk winner Edrell Dy, fought hard despite dealing with her injured back. She even had Charlotte in the Bank Statement before the defending champ got to the ropes.

It was an amazing fight put up by the two, with the crowd appreciating their match and chanting, “Women’s Wrestling!” all match long. ‘Greatest g*go of all time’

Count on Chris Jericho to rile a crowd up.

The 45-year-old Canadian proved why he’s one of the best heels (bad guys) in the business.

Jericho tried to hush the crowd as he shouted, “Quiet!” for a number of times as he opened his promo.

“I haven’t been to the Philippines for eight years and I hope I don’t come back for another eight because the Philippines stinks!,” he told the crowd. “And Manila is the anus!”

The crowd didn’t take his remarks too kindly, cheering “Duterte!” in reply.

Jericho, the first WWE Undisputed Champion, didn’t quite get the chants and asked, “What did you call me? You called me a g*go?,” which was met with chants of the slur.

He responded, “I’m going to give you the greatest gift from the greatest g*go of all time. Drink it in, man,” before soaking in the boos. He was peppered with “g*go” chants throughout his match with Roman Reigns, unloading on the Big Dog but never taking his attention from the crowd. At one point, Jericho even shouted, “Shut up, g*go!,” as the crowd continued to make noise against him.

Jericho, though, would be on the receiving end of a Spear as Reigns, who was heavily booed in his entrance, left the ring in cheers. Picking up where Jericho left off, WWE Universal Champion Kevin Owens played the crowd in his main event match against Seth Rollins and Sami Zayn.

With the audience chanting, “Fight Owens Fight!,” he refused to get in the ring and told the crowd, “You can’t tell me what to do.”

The crowd begged to be heard, chanting “Ole!” for Zayn and “Crossfit Jesus!” for Rollins.

But the champ would have none of it, decking Rollins to the ground before telling the arena, “I’m the Crossfit Jesus!” before doing a pair of jumping jacks. Owens would retain his belt thanks to a Pop-up Powerbomb on bitter rival Zayn, but wanted to put insult to injury after the bell as he attempted to Pedigree the Underdog from the Underground.

That was when Rollins made the save, hitting Owens with a flying knee before setting him up for Zayn’s Helluva Kick. Zayn returned the favor to Rollins, pushing Owens for a Pedigree to end the show.