CM Punk’s octagon debut may not have gone the way he planned, but he still collected a hefty pay envelope in the process.

Despite not having any martial arts background or amateur MMA fights under his belt, the 37-year-old former WWE superstar stepped inside the cage against welterweight up-and-comer Mickey Gall at UFC 203, where he eventually got submitted in less than a round.

Punk, whose legal name is Philip Brooks, cashed in a $500,000 fight purse for his valiant effort, according to figures released by the Ohio Athletic Commission to MMA Fighting on Monday (Tuesday in Manila).

Punk’s commission averages out to around $3,731 per second for his lone professional fight, which lasted just a little over two minutes.

His reported salary is also a flat $500,000 fee, meaning he wouldn’t have received a win bonus had he won, while his opponent only received a measly $30,000.

Prior to his defeat, Punk trained for nearly two years at Roufusport in Milwaukee to prepare for his UFC debut at the Quicken Loans Arena in Cleveland, Ohio on Sunday.

As expected, most of UFC’s roster didn’t take too kindly with the ex-professional wrestler’s payout, as many believed he shouldn’t have fought in the first place—given his lack of experience and fighting background.

Former UFC Lightweight titleholder Rafael Dos Anjos noted on Twitter that he did not receive the same compensation during his tenure as champion, while Welterweight standout Kevin Gastelum mocked Punk for his underwhelming performance. 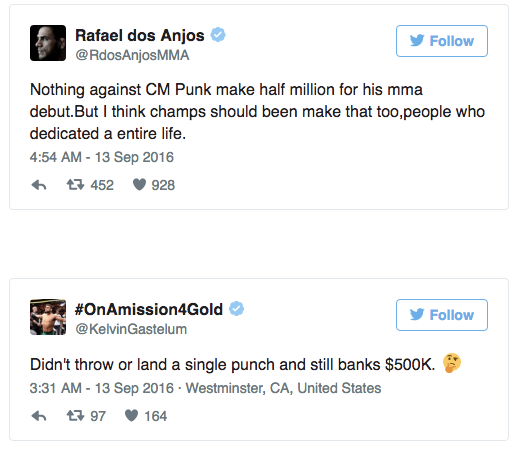 Yancy Medeiros, who fought in the same card, chimed in saying that Punk seemed like the real “winner” due to his salary, while Chris Cyborg boldly proclaimed that the UFC should invest more on women fighters rather than “circuit payday fighters.” Read the complete list of UFC 203 salaries below. These figures do not represent a fighter’s total earnings, as certain sponsorship incomes, pay-per-view bonuses and discretionary post-fight bonuses are not publicly disclosed.  Khristian Ibarrola

Figures from MMAFighting via  the Ohio Athletic Commission: