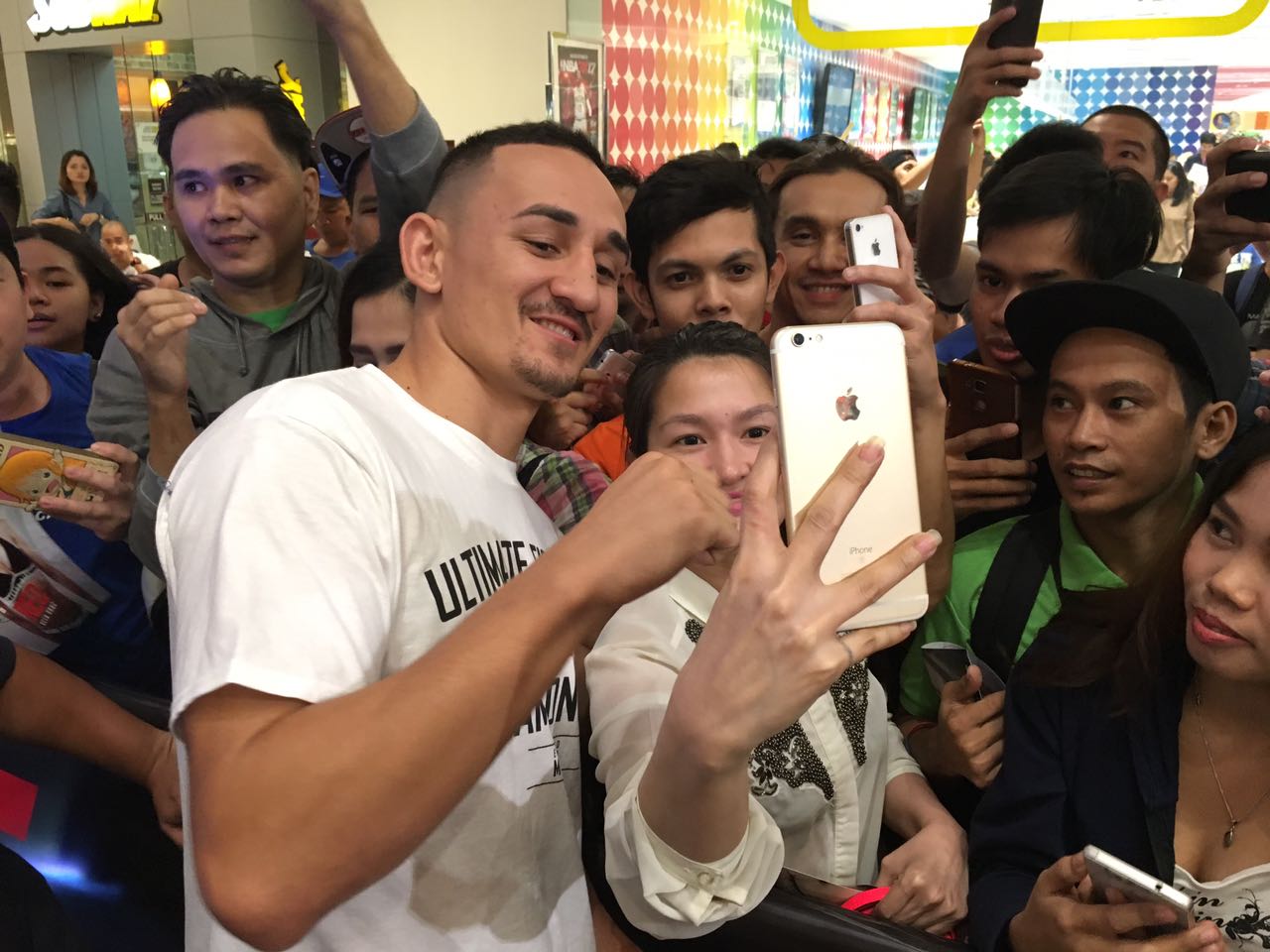 Max Holloway takes a selfie with fans during an open workout Saturday as part of a promotional tour for UFC Fight Night Manila on Oct. 15. Photo by Mark Giongco

Jose Aldo can keep on running and Max Holloway will just be right behind him chasing.

Holloway, the No. 3 featherweight in the UFC, called out the interim featherweight champion repeatedly during his open workout at the Megamall as part of the UFC’s promotional tour for the Oct. 15 Fight Night in Manila.

“You can keep running but I’m gonna keep chasing,” Holloway said to the delight of Filipino fans.

“If you guys want me to have that shiny gold belt around my waist, tag that guy [on Twitter] running a mile away from me and let’s give you guys the fight you want to see.”

The 24-year-old Holloway’s trash talk comes on the heels after the Brazilian fighter said he’d rather face Anthony Pettis as Plan B if a rematch with Conor McGregor fails to materialize.

Holloway fired at Aldo for refusing to fight him and revealing that a bout against Pettis is easier and makes more sense financially.

“If you think you’re the best fighter in the world, keep proving it,” Holloway told reporters on Saturday.

“I just lost more respect for a champion. A champion should be the guy who’s willing to fight the best guy in the world,” he added. “I understand everybody’s talking about these money fights, megafights but at the end of the day, you should wanna fight. He blatantly came out and said he’d rather fight Pettis because this is an easier fight and he sells more. But the money fight is Max Holloway. A lot of people wanna see me fight.”

Holloway feels he has earned the right to face Aldo and have his long awaited title shot after going undefeated in his last nine fights.

He last fought three months ago when he outpointed Ricardo Lamas at UFC 199 in Inglewood, California.

Holloway, who has a reputation for fighting every man who stands in his way, has been waiting for his chance and is still willing to wait longer for that golden opportunity.

“It is what it is. There’s nothing I can do. All I can do is keep talking the talk and keep walking my walk. If, when Jose Aldo decides to stop running, we’ll get the fight but if I gotta go for 10, I’ll go for 10. I believe that I’m the best fighter in the world,” he said.

“I understand, you can get injured and this and that but go in there and control what you can control and go and keep doing you and winning the fights.”