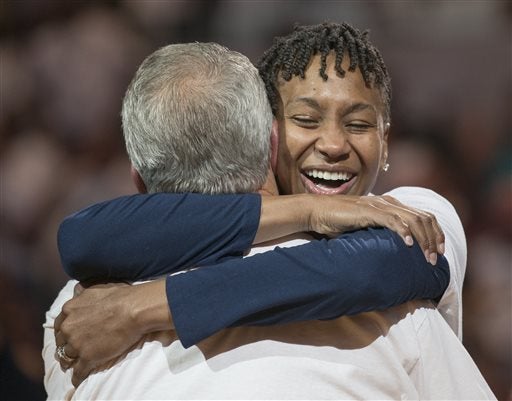 Tamika Catchings gets a hug from Rick Fuson, President of Pacers Sports and Entertainment, following a WNBA basketball game against the Dallas Wings in her final regular-season game. AP

INDIANAPOLIS — Tamika Catchings received a rousing send-off in her final regular-season WNBA game on Sunday (Monday Manila time), finishing off a 15-year career in Indiana with 16 points in a win over Dallas and an emotional goodbye to her adopted hometown fans.

Catchings received a standing ovation when she left the game with 1:33 left in the fourth quarter of the Fever’s 83-60 victory.

Indiana will host Phoenix for a single-elimination game in the first round of the playoffs.

Elsewhere in the league, Breanna Stewart scored 18 points as the Seattle Storm clinched the seventh seed in the playoffs with an 88-75 victory over Chicago.

Seattle will play at Atlanta in the opening round. Chicago has a first-round bye.

Diana Taurasi had all of her 18 points in the first half as Phoenix beat San Antonio 81-65, while Connecticut wrapped up its season with an 87-78 win over Washington.