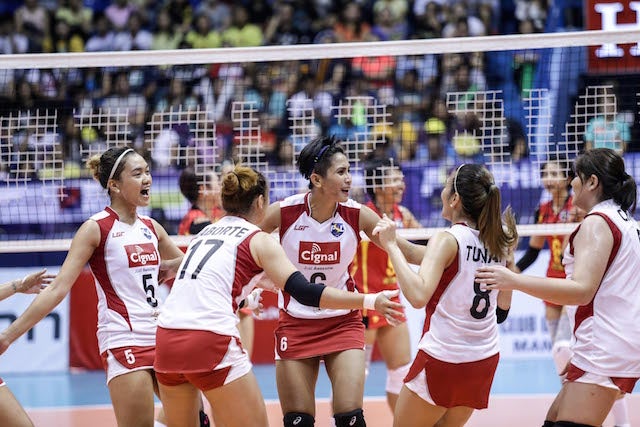 Olympian Lynda Morales of Puerto Rico will be returning for another tour of duty when she powers Cignal in the 2016 Philippine Superliga (PSL) Grand Prix women’s volleyball tournament next month.

Fresh from campaigning in the Rio Olympics, Morales will serve as the HD Spikers’ anchor on defense together with Laura Schaudt, an explosive 6-foot-5 open hitter from Oregon State University.

The HD Spikers also made a strong recruitment run during the mid-season when they tapped Paneng Mercado from F2 Logistics and Janine Marciano from BaliPure while bringing back the league’s first Most Valuable Player Venus Bernal to form a three-headed monster that could light up the scoreboard.

“I like the composition of my team,” said Cignal coach Sammy Acaylar, who still has Michelle Laborte, Jheck Dionela and Cherry Vivas to bank on.

“I know this is still early, but I think I can say that this is really a fighting team. Everybody is capable of bringing in big numbers from all categories.”

But it won’t be a walk in the park for the HD Spikers.

Foton and Petron, two teams who figured in an explosive finals showdown last year, would surely not go down without putting up a good fight.

The Tornadoes would also parade a seasoned Italian mentor in Fabio Menta, who steered them to a seventh-place finish in the AVC Asian Women’s Club Championship at the Alonte Sports Arena in Binan City two weeks ago.

On the other hand, Petron remains formidable as it drafted middle blocker Serena Warner and open spiker Niemer, who is said to be an explosive scorer and grizzled international campaigner after having stops in France, Puerto Rico and Azerbaijan.

“I am confident that they can address our needs both on offense and on defense,” said Petron’s new coach Shaq Delos Santos, adding that they also tapped April Ross Hingpit from Cignal. “We really pushed hard to acquire them because they are what we exactly need.”