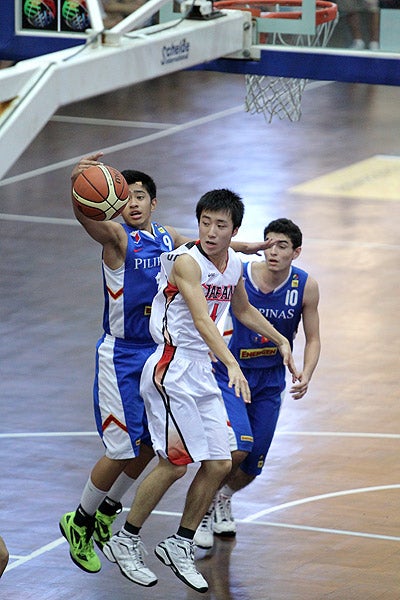 HO CHI MINH, Vietnam—After matching the fourth-place finish of the previous youth batch, the Energen Pilipinas Under-16 squad thinks it can build on its promising Fiba Asia run.

Their crafty moves got the attention of several foreign coaches, but national youth coach Olsen Racela admits there should be more emphasis on outside shooting in the Philippines’ future international basketball campaigns.

“Our skills are above average, other coaches have been telling me that,” said Racela. “We just lacked the height, and because of that, we can’t just rely on skills. We also need to improve on our outside shooting.”

The Philippines settled for a fourth-place finish in the recent Fiba Asia U16 tournament after a hot-shooting Japan torched the young Nationals from three-point range, 94-81, in the knockout battle for bronze on Friday in Nha Trang.

The painful loss came after South Korea also crushed the Philippines’ hopes of a Worlds stint following a 67-58 decision in the semifinals.

Back-to-back champion China and runner-up South Korea earned the right to represent Asia in the 2012 Fiba U17 World Championship in Lithuania after topping the 15-nation tournament.

“In the [basketball] culture of Koreans and Japanese, they really develop shooters,” said Racela. “That’s what we need in international competitions.”

There’s no overlooking, though, the young Nationals’ strong start in the tournament that gathered the sport’s best in the region.

With guard Rev Diputado emerging as the team’s most consistent performer, the Philippines rolled past its opponents in the first six games, including an 82-69 upset of West Asian champion Iraq in the quarterfinals.

Filipino-Australian wingman Jordan Heading, who only joined the team two months ago, shone as one of the seven in the team’s 12-man roster who made their international playing debut.

“I told the players that you’ll remember this experience,” said Racela. “After the tournament, not only will they become better players but also better individuals. In their career in the future, they can draw something from this experience.”

Read Next
NU, La Salle dominate tennis; Eagles dispute title versus WNU
EDITORS' PICK
EDITORIAL: To a bike-friendly future
vivo’s coming to town to grant wishes with more holiday promos
The Best Tech Gifts For The 2022 Holidays
House energy committee chair Arroyo bats for cheap electricity
Pagasa: Warm, sunny Sunday in most parts of PH
Is it safe to talk politics again at family gatherings? ‘The Reconciliation Dinner’ shows us what that’s like
MOST READ
LOOK: Vhong Navarro transferred to BJMP detention facility in Taguig
The Elephant Man in the Senate
Posh village as ‘shabu’ haven
LOOK: Zanjoe Marudo bonds with Ria Atayde, her family
Don't miss out on the latest news and information.