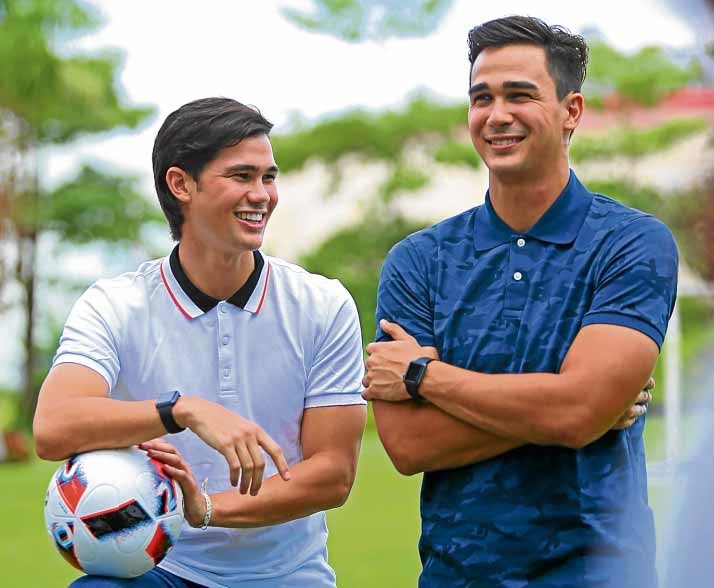 British-Filipino athletes James and Phil Younghusband found this out when they began teaching football to public school students and physical education teachers through the academy they have set up.

And sometimes, the popular siblings of the Philippine Azkals national football team are the subject of jokes while performing their advocacy despite the star power they exude on the football field.

“I speak better Filipino than James. The students laugh at us, especially when I say ‘ano ang natutunan mo?’ or ‘pasa!’ or when I instruct them which specific body parts to use like ‘sa loob ng paa!’” said Phil while laughing.

“We know basic Tagalog. I use ‘syempre,’ ‘bilis! bilis!’ when I talk with them,” added James. “It’s good that we have coach Jojo (Durian of the The Younghusband Football Academy) to translate for us.”

“In Europe or in South America, they also hire foreign coaches to lead their teams. They manage to communicate through body language,” Phil explains. “You have, for instance, a crowd of 50,000 so you will really not hear each other. On the field, I can tell someone to pass [the ball] to me without actually saying anything.”

The brothers’ fame went sky-high when the Azkals competed and won in various meets overseas that began in the 2010 AFF Suzuki Cup where the Philippines defeated defending champion Vietnam in a match considered as the biggest upset in tournament history.

That breakthrough victory, also referred TO by Filipino fans as the “Miracle of Hanoi,” started the resurgence of football in a country where basketball reigns supreme.

Asked what drove them to settle in the Philippines and get Filipinos into football, James said: “Before we got called to be part of the Philippine football team [under 23 level] in 2005, we would always come here for vacation. We later decided that we might as well live here instead of traveling back and forth to England. The longer we stayed here the more we fell in love with the place.”

Phil and James had brief stints with the junior squad of the famed Chelsea FC based in London before coming over to the Philippines.

While playing for the Azkals, they put up The Younghusband Football Academy (TYFA) where they teach kids as part of the country’s grassroots development program.

Outside of the national team, the brothers see action and play professionally with the Loyola Meralco Sparks in the United Football League.

Phil said relocating here did not require major adjustments for him and his brother.

“The Philippines is our home because our mom’s family is here. The transition was actually more difficult for our sister Keri, who was just 8 then,” he added.

They were orphaned in 2011, following the death of their mother Susan Placer-Younghusband due to a heart attack. They lost their British father to cancer in 2004.

James said there was never a time when he thought of quitting football.

“You have some good and bad days, but you just think of the good memories and that’s what motivates me. Football is something that we’ve shared together as a family. This has made Phil and I the best of friends..

“Our mom and dad have traveled around Europe and Asia to watch us play,” said James.

“Bad days,” he explained, were instances “when you play terribly and every one makes fun of you. What’s great about football is that it’s really a team sport. Your team becomes like a family. You know each other inside and out.”

Along with the recognition they have received for winning in football tournaments abroad, numerous companies have chosen them as brand ambassadors as the epitome of skill, attitude, commitment and discipline. However, things weren’t always peachy for the duo.

They said they had to hurdle numerous challenges while they were just starting TYFA. “It was hard to get people on board to support the sport and our programs. At that time, football wasn’t very well known,” recalled Phil.

“Eventually, our success on the field brought more success outside of it. We were able to coach more kids and run more programs that spread the word on football.”

The duo eventually conducted football clinics, not only in sports clubs and schools in Metro Manila, but also in provinces like Cavite, Bacolod, Legaspi, Tarlac and Palawan.

Seven years since they joined the Azkals out of love for country, the Younghusbands said they have no intention of stopping.

“I will retire only when my body tells me,” said Phil. “Even when we retire we will still be involved in football, be it in the coaching side or the management side, or the political side. The growth of Philippine football is so important to us and we want to make sure that it continues to grow.”

The Younghusbands are among the Inquirer’s new brand ambassadors for the recently launched #MyINQUIRER campaign highlighting the new media quintet experience. James said he took on the challenge because “our goal is to promote football and sports and help in its development, as well as to get more kids here to play it.”

As sports icons, Phil said he would try to convince every Filipino “to invest more in healthy living and on sports.”

“I would keep on encouraging people to be involved in sports,” said James. “It helps in all aspects, even in the improvement of people’s moods. It definitely brings people together.”

Phil agreed: “You learn certain values through sports, specifically football—hardwork, dedication and self-expression. These can also help you as you take on life’s challenges.”