Pacquiao leaves for US | Inquirer Sports

Pacquiao leaves for US 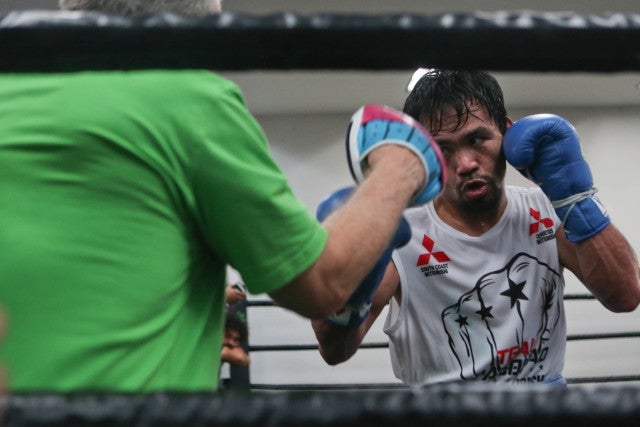 Manny Pacquiao’s hard grind is over.  He’ll be wrapping up his training in Manila this afternoon and fly to Los Angeles tonight.

From there, he’ll go through the tapering phase of his preparations for his showdown with World Boxing Organization welterweight champion Jessie Vargas on Nov. 5 in Las Vegas.

Workouts at Freddie Roach’s Wild Card Gym in Hollywood begins Monday, though they’ll no longer be as long and as tough as his regimen at Elorde Gym in Parañaque.

Following an eight-round sparring session with the unbeaten Jose Ramirez and Leonardo Doronio, Roach believes Pacquiao is ready for the 12-rounder pay-per-view tussle at Thomas & Mack Center in Las Vegas.

Pacquiao has succeeded in juggling legislative duties as senator, fulfilling his basketball and spiritual obligations, and whipping himself into shape for the 67th fight of an illustrious career that saw him become an eight-division world champion, three-time fighter of the year and Fighter of the Decade (2000-2009).

Just the same, the tested tandem will continue rehearsing their fight plan, tinkering with it if necessary, as they go through more mitts and sparring sessions.

Apart from Roach, Pacquiao will be joined in the flight by wife Jinkee and assistant trainers Buboy Fernandez, Nonoy Neri and Haplas Fernandez, and adviser Michael Koncz.

Like before, Pacquiao’s trunks, robes and headband will be laden with sponsors’ logos, including that of new corporate backer Mighty Sports, in the fight to be beamed over Solar Sports and GMA 7 and on pay-per-view over Sky Cable and Cignal TV.

Oddsmakers have installed Pacquiao a huge 9-1 favorite over Vargas.